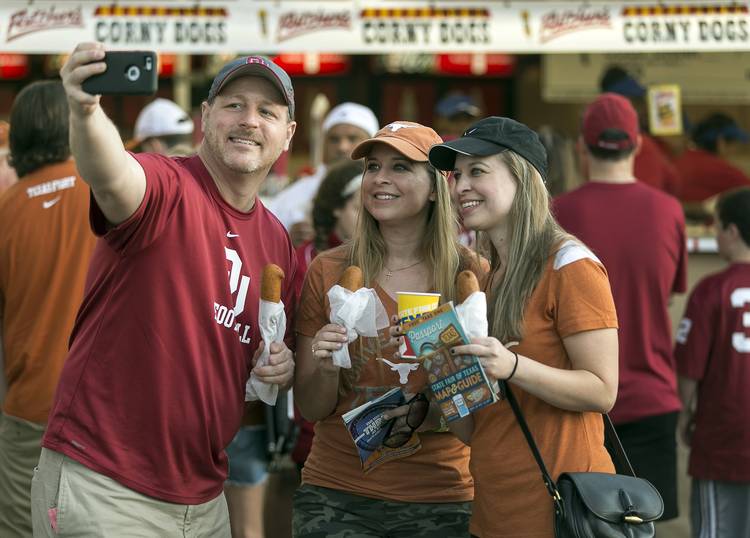 OCTOBER 10, 2015 - Oklahoma alumni, Devon Williams, left, takes a selfie of his girlfriend, Texas alumni, Karen McAllister, center, and twin sister, Connie McAllister, before enjoying a famous Fletcher's corndog at the State Fair of Texas before the start of the Big 12 conference game between Texas and Oklahoma held at the Cotton Bowl in Dallas, Tx., on Saturday, October 10, 2015. (RODOLFO GONZALEZ / AMERICAN-STATESMAN)

So when Sooners offensive coordinator Lincoln Riley tweets that one of the school’s Big 12 championship trophies was broken, he’s entitled to frame it how he pleases.

All we see is a hilariously sad attempt to transport fragile objects.

So yeah, Oklahoma has 10 Big 12 championships (and now nine trophies) to the Longhorns’ three. However, it is still an institution of higher learning — one that appears to have attempted to roll a cart down a slope, somehow expecting the objects resting on said cart not to roll off.

Couldn’t have seen that one coming, right?

See, there are plenty of jokes to go around; and 258 days remaining until the second weekend of the State Fair.