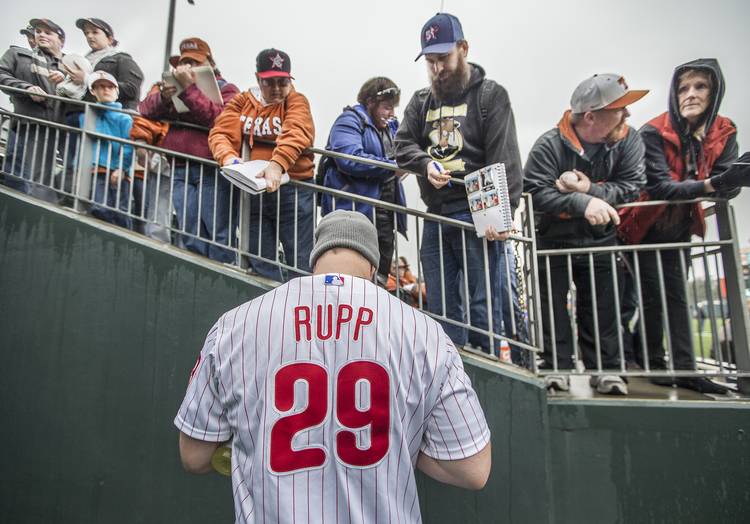 Some baseball fans gather in the rain at the UFCU Disch-Falk Field for Autographs and to meet one of their favorite Texas Longhorn Alumni baseball player Cameron Rupp for fan appreciation day before the alumni game on Saturday, Jan. 31, 2015. (RICARDO B. BRAZZIELL / AMERICAN- STATESMAN)

On Saturday, the past will meet the present on the 40 Acres.

The Texas baseball team is set to host over a dozen professionals at its alumni game on Saturday afternoon. The annual event is the closing act for Texas’ fan appreciate day, which is scheduled to start at 9:30 a.m. Longhorn fans will also have chances to collect autographs, play catch in the outfield and watch batting practice.

The showcase scrimmage will be a nine-inning affair that begins at 2 p.m., and the Texas Exes are expected to play in three innings. The Longhorns will then participate in an intrasquad contest, and head coach David Pierce said his team would use the afternoon as a “dress rehearsal” for its season-opening game against Rice on Feb. 17.

“At the end of it, we get to socialize with those (alumni), have a dinner with them,” Pierce said. “Hopefully our players understand that history that they’ve created here.”

Los Angeles Angels closer Huston Street, free agent outfielder Drew Stubbs and Milwaukee pitchers Taylor Jungmann and Corey Knebel are among the alumni who will be at UFCU Disch-Falk Field. Nearly seven months after they were respectively drafted by Washington and Colorado, Tres Barrera and Ty Culbreth will also reunite with their former teammates.

“I’m excited to just see the players, Tres, Ty Culbreth, the guys that were on the team last year,” senior outfielder Zane Gurwitz said. “It’s always cool to mingle with the big leaguers and learn a thing here and there. It’s just a fun day. It’s relaxing, and it’s just a fun day for competition and to watch some baseball.”

Other confirmed attendees include:

Not all of the alumni in attendance will play in the scrimmage. Current Longhorns will pitch for both sides.