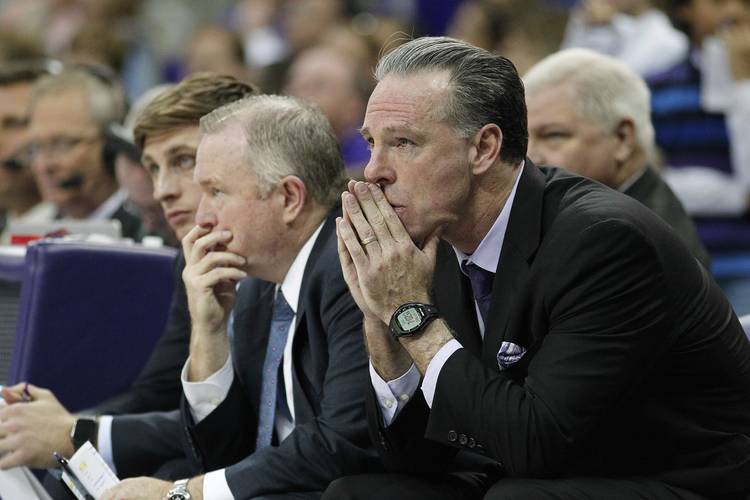 TCU coach Jamie Dixon watches the final seconds of the second half in the team's NCAA college basketball game against Auburn in Fort Worth, Texas, Saturday, Jan. 28, 2017. (Paul Moseley/Star-Telegram via AP)

About the Longhorns: A senior-laden Texas squad had all sorts of problems in Fort Worth last season and lost 58-57. That ended UT’s 11-game winning streak in the series. … Both Andrew Jones and Eric Davis Jr. are playing far better now than when Texas hosted TCU on Jan. 11. Jones had eight points in 28 minutes in the first matchup. He’s finished in double figures in six consecutive games. Davis had seven points the first time around. He’s made 12 of 28 shots from 3-point range in the last four games. … The Horns are 2-4 in the last six games without suspended forward Tevin Mack, who likely won’t return. No final decision has been made, and Mack remains enrolled at UT. He needs to finish the spring semester with good grades should he wish to transfer.

About the Horned Frogs: It was thought that Jamie Dixon’s club would keep rising after a win over Texas in mid-January. TCU then knocked off Iowa State. But the Horned Frogs fell into a four-game hole, losing to Texas Tech, Baylor, Oklahoma State and Auburn. JD Miller had 18 points in a critical 86-80 overtime win over Kansas State on Wednesday to stop the losing skid. It was TCU’s first win in Manhattan as a member of the Big 12. … Kenrich Williams hit three of TCU’s 10 3-point shots against K-State. The Frogs finished the game an eye-popping 10 for 17 from beyond the arc. … TCU fans are starting to turn out. The Frogs are averaging 6,180 fans this season, the highest total since the 1986-87 season, coach Jamie Dixon’s senior season.

Earl Campbell compares current NFL to professional wrestling: ‘It was real football when Jack Tatum and I hit each other’