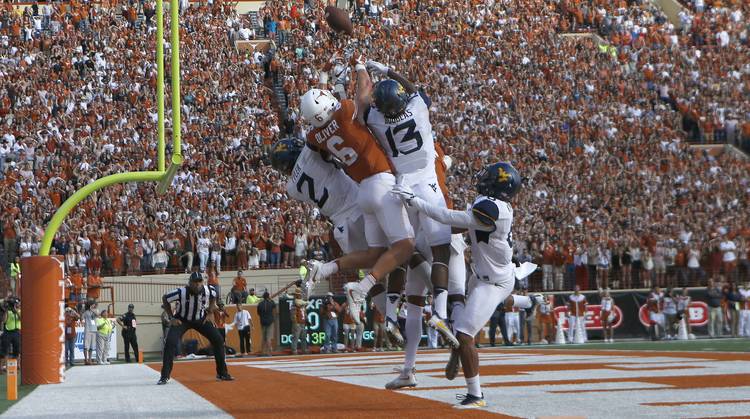 Texas wide receiver Jake Oliver is stepping away from football according to an ESPN report Monday.

Oliver told ESPN reporter Max Olson that he is done playing football. Oliver will graduate from Texas in May and wants to focus on his future.

Oliver was recruited out of Dallas Jesuit, and he was the state’s all-time leader in receptions when he signed with the Longhorns in 2013. The four-star prospect, however, struggled to find playing time at Texas, and he had only made a few appearances on special teams through the 2015 season.

Citing a better diet and a switch to an inside spot in Texas’ passing attack, Oliver broke out this past fall. The 6-foot-3-inch receiver ranked second among the Longhorns in receptions (33) and fifth in receiving yards (358). Oliver did not score, though, in 2016.

“After giving it a lot of thought with my family, I’ve decided to forego my remaining eligibility and begin my future career path,
Oliver said in a statement released by the University of Texas. “I feel so fortunate to have already earned my degree from one of the best universities in the nation, The University of Texas.”

The full statement from Oliver:

“After giving it a lot of thought with my family, I’ve decided to forego my remaining eligibility and begin my future career path. I feel so fortunate to have already earned my degree from one of the best universities in the nation, The University of Texas. It’s helped me already have a job in hand, and I’m ready to start that next chapter. In the last four years I’ve grown so much, met so many people, and I’ve built friendships with that will last a lifetime. I want to thank all of my teammates, coaches and the staff members who have had such a big influence on me both on and off the field. I’ve enjoyed every moment of being on this team and will cherish that for the rest of my life. Even though I’m going to miss football, I’m really excited to take on a new challenge. I talked with Coach Herman and appreciate his support and understanding. I wish the best for the new staff and all of my teammates. I know firsthand how good this team can be, and I’m looking forward to cheering them on to a lot of wins. I’ll always bleed burnt orange.”