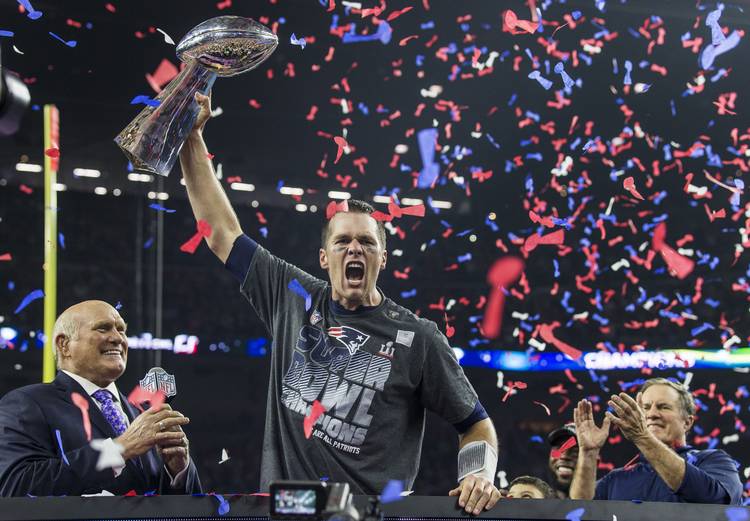 New England Patriots Tom Brandy celebrates after receiving the Vince Lombardi Trophy for beating the Atlanta Falcons 34-28 in overtime on Sunday, Feb. 5 , 2017 during the NFL Super Bowl LI football game at the NRG Stadium in Houston, Texas. RICARDO B. BRAZZIELL/AMERICAN-STATESMAN

The NFL wrapped up its football season on Sunday as New England beat Atlanta in Super Bowl LI. New England and former Texas standout Malcom Brown trailed by 25 points in the third quarter, but the Patriots rallied for a 34-28 win in overtime.

According to Twitter, more than 27.6 million Super Bowl-related tweets were sent during the live broadcast on FOX. One of those tweets belonged to Sam Ehlinger, who will be a freshman on Texas’ football team this fall.

I feel for the Falcons, I know what it's like to lose in OT at NRG Stadium🙄

Ehlinger was the quarterback for Westlake in the 2015 Class 6A, Division I championship game, which, like the Super Bowl, was played at Houston’s NRG Stadium. The Chaparrals were upended by Galena Park North Shore in overtime of that contest, and that has not been forgotten by LSU signee K’Lavon Chaisson. Chaisson, who recently chose LSU over Texas, attends North Shore.

Here are some of the things that Ehlinger’s teammates at Texas had to say about the Super Bowl:

LOL THIS IS MADDEN!

I know the whole city of Atlanta hurt rn..

Couldn't be more happy for my big brother Mal🤘🏾#HookEm

In all honesty the real MVP is the pats defense, they did a complete 180, they could not stop ATL the first half

Momentum is REAL! Make or break you #SB51

Man Julio is the goat