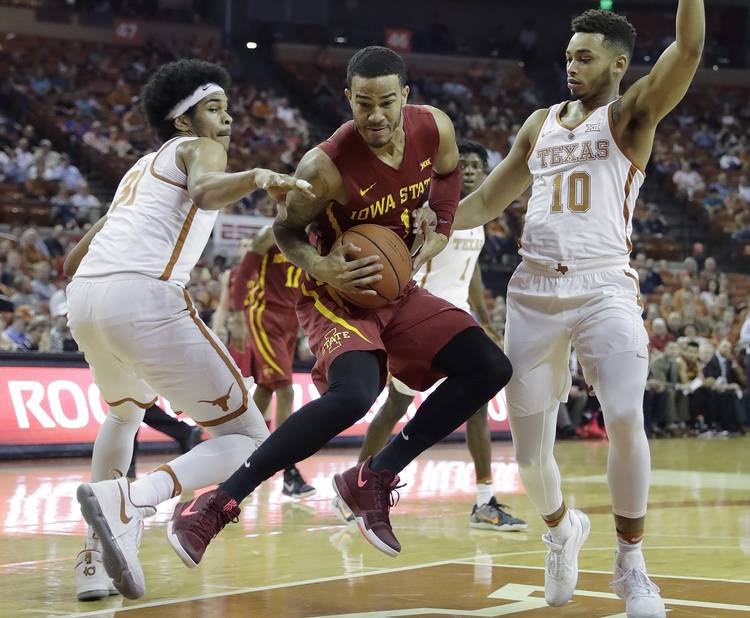 Iowa State certainly looked like it was in full post-Kansas hangover mode falling behind by 17 points on Tuesday against Texas.

But the Cyclones came storming back and made it a one-point game with less than four minutes to play, stunning the Erwin Center crowd that was desperate to see the home team get a rare Big 12 win.

Texas senior Kendal Yancy appeared to give his group the edge with a running, two-handed jam. But Deonte Burton fired back with a sizzling 3-pointer, tying the game with 47 seconds left.

Jarrett Allen’s two free throws with 7.2 seconds left made the difference, though. The Longhorns held their breath as Matt Thomas’ off-balance 3-pointer went awry and they celebrated a 67-65 win.

With a handful of NBA scouts in attendance, Allen gave them something to think about. Allen scored on his customary inside moves. He showed a new sky hook after moving to his left a few feet outside of his normal range. Allen opened the second half with six straight points, then missed two 3-pointers and had a frustration foul. Still, an overall solid night for the 6-foot-11 freshman.

Every player dressing in the visitor’s locker room probably felt like doing a heat check Tuesday after the Cyclones drilled 18 3-pointers against the Jayhawks. But Iowa State came back down to Earth statistically against UT. Thomas hit five from beyond the arc, but the team as a whole was 9 for 25.

A team that needed something good to happen early could not have been happier. The Longhorns came out red hot, hitting six of their first nine shots and taking a 13-3 lead. Kerwin Roach Jr. had a follow-up slam, and Jarrett Allen scored twice. That lead eventually mushroomed to 22-5. This was all happening without much from Andrew Jones, who started the game 1 for 7.

Talk about a bad omen. Jacob Young’s only shot of the first half was an air-balled 3-pointer as Texas led 30-13. From that point on, the Cyclones turned up the juice. Burton scored on a run-out dunk as part of a 9-0 run. Minutes later, Burton fired a bullet pass to Matt Thomas in the right corner for a wide-open trey. Iowa State’s 14-1 run closed the gap down to four.

The Longhorns have two consecutive games north of the Red River. First comes Saturday’s road trip to Oklahoma State, a team current riding a five-game winning streak. Guard Jawun Evans is shooting 43 percent from 3-point range. Then comes a Valentine’s Day game with UT’s longtime nemesis Oklahoma in Norman. The Sooners are 8-14 this season and struggling just like the Horns.

Kyle Shanahan is officially taking his heart, and his playbook, to San Francisco