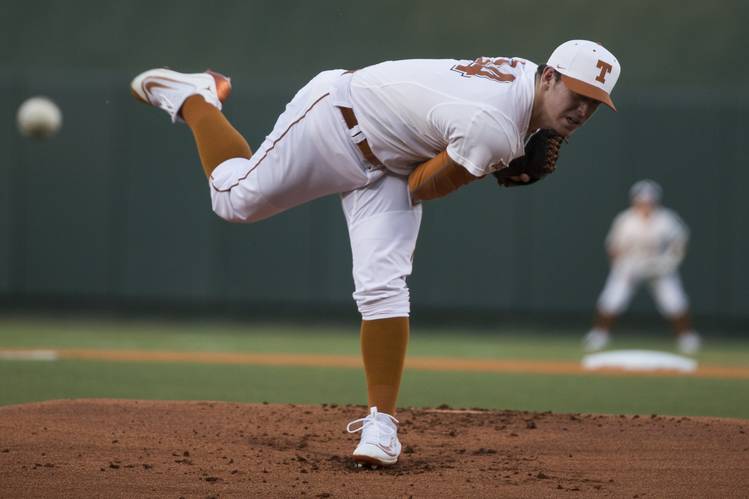 Texas' Kyle Johnston had a rough outing Sunday in Morgantown, W.Va. as the Longhorns lost their sixth-straight Big 12 game, falling 9-5 in the series finale against the Mountaineers. RICARDO B. BRAZZIELL/AMERICAN-STATESMAN

College baseball season is here as the Longhorns recently played their alumni game last week and preseason rankings are flowing out.

While another Big 12 team from Texas is getting a lot of buzz, TCU, and Texas is out of the top 25, Baseball America seems to like the Longhorns chances this season.

The premier baseball scouting service listed three Texas players in the Big 12’s top 20 prospect list for 2017 and a fourth player in the top 10. According to the report Texas right-hander Morgan Cooper is the No. 2 prospect in the conference, followed by right-handed teammate Kyle Johnston who is followed by teammate Patrick Mathis, an outfielder.

Third baseman Bret Boswell is No. 7 on the list.

The site also ranks its top-10 2018 prospects and top-10 newcomers. While Texas lacks a player on the 2018 list, shortstop David Hamilton is No. 3 on the newcomer list while pitcher Blair Henley is No. 9. Texas may have had a third player ranked had tall, lengthy right-hander Mason Thompson decided to pass on a Major League contract and stayed committed to Texas. Instead, Thompson, from nearby Round Rock, was selected in the third round of the draft by San Diego and is now in the Padres’ system.

Baseball America seems bullish on the Longhorns overall, despite them not being in the top 25. While the site projects strong seasons from TCU, Oklahoma State and Texas Tech, they also see Texas (and West Virginia) as projected regional teams.

Here’s what the site says:

A new era is underway in Austin, as former Tulane coach and Texas native David Pierce takes over the program after 20 years under Augie Garrido, college baseball’s all-time winningest coach. Pierce inherits a team that went 25-32 last season but should have the talent to compete in the postseason in 2017. The rotation will be the biggest strength, with a trio of prospects in Jr. RHPs Morgan Cooper, Kyle Johnston and Connor Mayes.