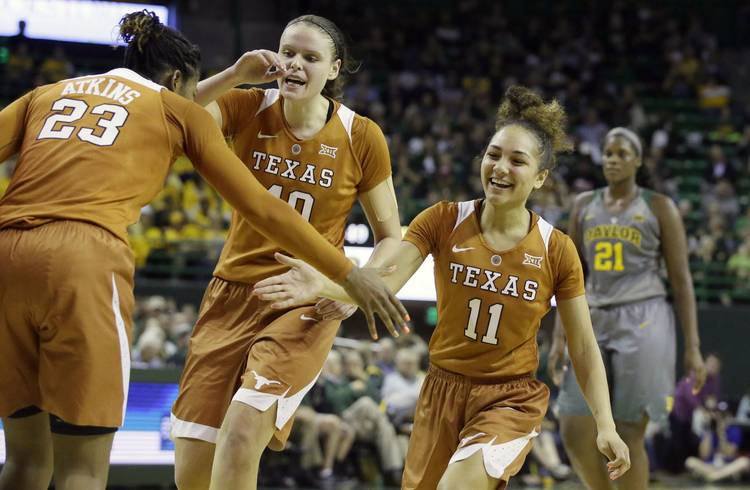 By beating Baylor for the first time since 2010 on Monday night, Texas made it official: the Longhorns have not been this strong in more than a decade.

Tracing the program’s biggest wins in five seasons under Karen Aston shows a trajectory that keeps trending up and shows no signs of slowing down. In case you’re just now catching up, here is a quick breakdown.

RELATED: Texas women put the Big 12 on notice with upset in Waco

Aston is unbeaten against the hated Aggies, a distinction few, if any, past coaches can claim. Both wins have come on neutral courts, with the latest one being a 67-65 nail-biter during the 2014 SEC/Big 12 Challenge in Little Rock, Ark. It was the only top-five matchup in series history, as Texas came in ranked No. 3 and Texas A&M was No. 4. Nneka Enemkpali went for 21 points and 13 rebounds, and Empress Davenport scored the game-winner with 4 seconds left.

A few weeks prior to the win over Texas A&M, Texas grabbed its second of three wins over top 10 opponents during its 13-0 start to the 2014-15 season. The inside tandem of Kelsey Lang and Enemkpali combined for 35 points, and the Longhorns held the Lady Volunteers 27 points below their season scoring average.

Led by 20 points from Imani McGee-Stafford — now Imani Boyette — Texas earned its first Sweet 16 berth since 2003-04. Expectations were tempered a bit after a rash of injuries led to a 9-9 Big 12 record and a No. 5 seed. The Longhorns opened the tournament by surviving No. 12-seeded Western Kentucky, 66-64, then beat the Bears on their home court to secure a place in the second weekend. A diminutive freshman named Brooke McCarty came off the bench to provide 16 crucial points.

Building on the successes of the year before, Texas went 28-4 to draw a No. 2 seed in the NCAA Tournament. The logical next step was a trip to the Elite Eight, which the Longhorns accomplished with a fourth-quarter comeback against the Bruins. Boyette scored 18 points and grabbed 10 rebounds as Texas overcame a six-point deficit entering the fourth quarter. Unfortunately, the Longhorns drew the misfortune of being placed in Connecticut’s bracket for the second-straight year.

No. 1 on this list for a myriad of reasons. It was symbolic of Texas kicking the door down and announcing its arrival to the rest of the Big 12. The Longhorns beat Baylor for the first time in 14 tries, broke the Bears’ 54-game home winning streak and moved to 13-0 in conference play. McCarty scored a game-high 22 points, Ariel Atkins had 20 and Joyner Holmes added 18. The Longhorns also have a pair of McDonald’s All-Americans on the way for next year.

Publicly, Aston downplayed the importance of beating Baylor. Which is fine, because at this rate there could be even bigger wins on the way.