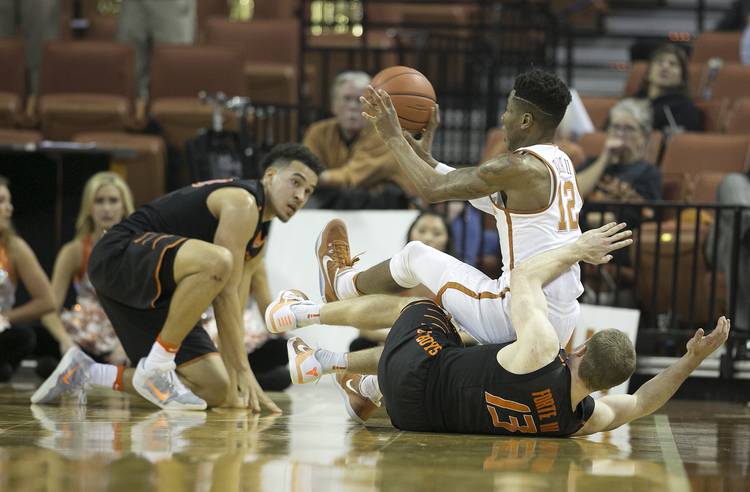 Series history: Texas leads the all-time series 49-41. The Longhorns built up an 11-point lead in the second half against the Cowboys at the Erwin Center on Jan. 4 and captured an 82-79 win. The Horns are 1-4 in their last five trips to Stillwater.

About the Longhorns: The last time these two teams played feels like a year ago. Tevin Mack led the way for the Longhorns with 27 points on 4 of 7 shooting from 3-point range. Mack has since been suspended indefinitely and is unlikely to return to the team. … Freshman G Andrew Jones is only getting better and better. He had 10 points, nine rebounds and seven assists in a season-high 36 minutes in the 67-65 win over Iowa State on Tuesday. … Senior Kendal Yancy played 20 minutes against the Cyclones, the most since he suffered a high ankle sprain in the Big 12 opener at Kansas State. It was also the most playing time he’s had this season. Yancy said Tuesday that his role is to “just try to bring a spark out there.” He once scored 29 against Iowa State two years ago.

About the Cowboys: This has been a season full of streaks in Stillwater. The Cowboys won four straight in December, then lost six consecutive games and won five more. Baylor broke OSU’s recent winning ways with a 72-69 victory on Wednesday. With that kind of success, OSU fans have gotten back on the Cowboy bandwagon. “That was the loudest I’ve heard it. Our fans are great. I can’t say thank you enough to them,” coach Brad Underwood said. …  G Jawun Evans is the only player within shouting distance of Kansas’ Frank Mason III on the Big 12 scoring list. Phil Forte III (.947) and Evans (.799) are among the top free throw shooters in the league. … Watch out for Jeffrey Carroll early. He’s reached double figures in scoring by halftime in 13 of the last 16 games.