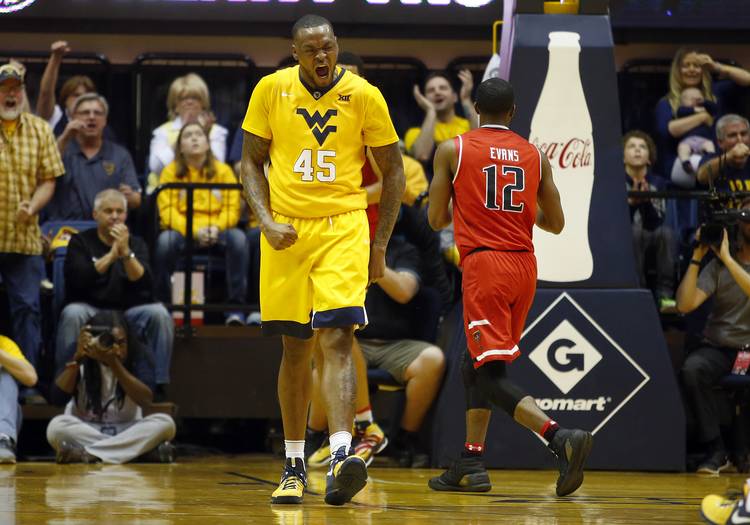 Elijah Macon #45 of the West Virginia Mountaineers celebrates after a basket against the Texas Tech Red Raiders at the WVU Coliseum on February 18, 2017 in Morgantown, West Virginia. (Photo by Justin K. Aller/Getty Images)

About the series: Texas leads the all-time series 8-5. The Longhorns lost a 74-72 seesaw battle against the Mountaineers at the Erwin Center on Jan. 14. The game featured nine lead changes as both teams shot almost 50 percent.

About the Longhorns: With Saturday’s loss to Kansas State, UT coach Shaka Smart is now 30-30 in two seasons with the Longhorns. “I think I’m certainly disappointed that our record is what it is,” Smart said. “Again, the question from there is what do you do?” … The Horns continue to stumble in close games. They are 3-7 in games decided by three points or less this season, which includes the two-point loss against the Mountaineers in the first round of league play. Jarrett Allen had a team-high 19 points, and Andrew Jones added 17 more. WVU was 4 for 18 from 3-point range. … Some of UT’s younger players may be hitting a wall. “They have a big role,” senior Kendal Yancy said, “so they really have no choice but to respond and they have no choice.”

About the Mountaineers: West Virginia didn’t convert a single field goal in the final 5:42 of regulation but still managed to pull out an 83-74 double-overtime victory over Texas Tech on Saturday. “I’m wore out,” WVU coach Bob Huggins said. The Mountaineers have had trouble closing out games much like the Longhorns have. Huggins’ team is 2-6 in games decided by seven points or less this season. … Huggins is still upset about WVU’s complete meltdown at Kansas last week when the Mountaineers gave away a 14-point lead late. “We gave one away that we shouldn’t have given away,” Huggins said. “But we’ve done that. This team has done that. Now we have to somehow get ready to play (Texas) on Monday.”