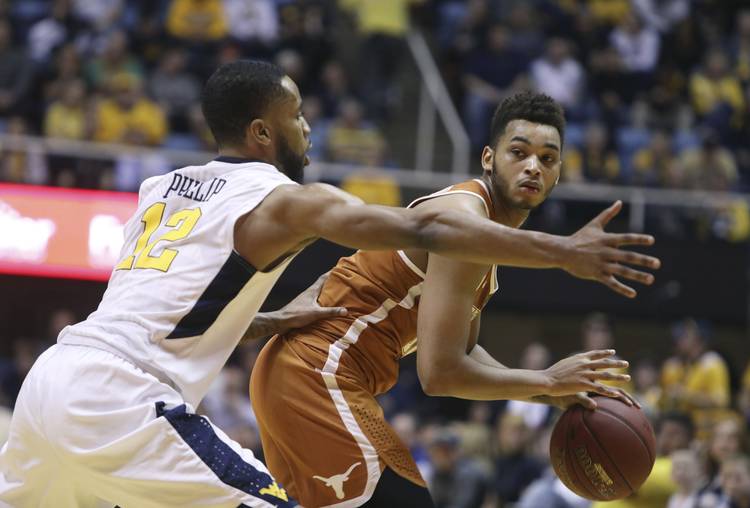 MORGANTOWN, W.Va. — Jarrett Allen’s breath-taking dunk and Bob Huggins’ heart-stopping sideline moment were about the only real memorable aspects of No. 12 West Virginia’s easy 77-62 win over Texas on Monday.

Allen, UT’s standout freshman, racked up 17 points and probably landed himself on all the highlight shows with a vicious one-handed slam in the first half. But at that point, West Virginia (22-6, 10-5 Big 12) held an 11-point lead built on the strength of a 25-3 run.

WVU’s Lamont West, who came into the game averaging 5.7 points, simply went wild. He was 6 for 8 from 3-point range and finished with 23 points. Jevon Carter pumped in 24 more.

Eric Davis Jr. came out firing wound up with a solid 14 points on 6 of 14 shooting. And don’t overlook Kerwin Roach Jr.’s 13 points and five rebounds. Both sophomores need to finish the regular season strong to give them a springboard into a critical offseason.

West Virginia was simply dynamite from 3-point range. The Mountaineers were 9 for 17 (52.9 percent) midway through the second half once the game shifted into cruise control. West was the main marksman. The Horns were simply trying to trade threes for twos, which you simply can’t do. Texas was 2 for 9 from downtown with 11 minutes left in the game.

There wasn’t much to like about the first half, outside of the Horns’ controlled start. Texas took a 12-6 lead, and James Banks had two blocks early. But that got washed away by West Virginia’s 25-3 run. Still, everyone — from those in the building to those watching at home — were mesmerized by Allen’s vicious posterization of Sagaba Konate.

Now, about that big Mountaineer run… oh, where to begin? West got things rolling with a 3-pointer on the right wing. Then on the next possession West drilled another one, this time getting whacked by Eric Davis Jr. for no apparent reason. West converted the four-point play, and the Mountaineers took off. Well, West did, anyway. he hit another bucket and had back-to-back 3-pointers that gave WVU a 31-20 lead.

The soon-to-be 13-time Big 12 champs are headed to Austin on Saturday. Maybe that’s being presumptuous, but is anyone really going to stop Kansas at this point? The Jayhawks currently have a three-game lead on the rest of the field. Coach Bill Self’s team first hosts TCU on Wednesday at Allen Fieldhouse.