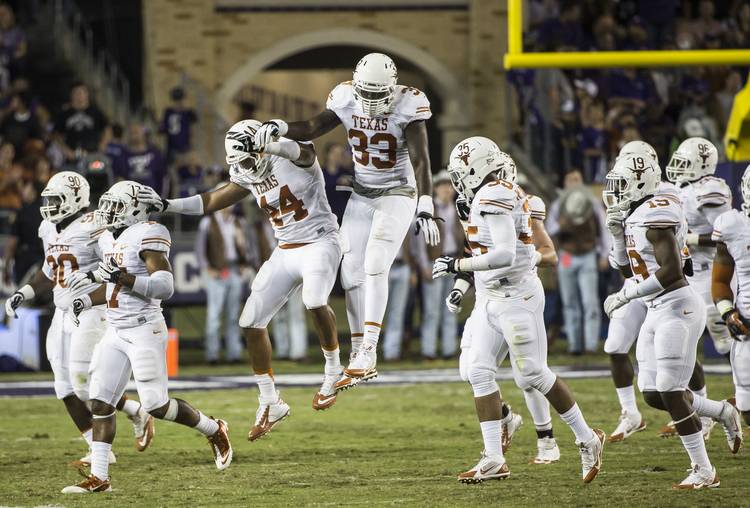 Texas Longhorns'(33) Steve Edmond celebrates an interception with (44) Jackson Jeffcoat and his team against TCU in the first half an NCAA college football game at Amon G. Carter Stadium in Fort Worth Texas, Saturday , Oct. 26, 2013. (RICARDO B. BRAZZIELL / AMERICAN- STATESMAN)

The former Longhorns standout and 2013 Big 12 Defensive Player of the Year has signed with the Winnipeg Blue Bombers. The Canadian Football League franchise announced his signing Tuesday.

Jeffcoat, who went undrafted after leaving Texas, spent two seasons with the Washington Redskins before signing with the Cleveland Browns in 2016. He was placed on the Physically Unable to Perform list before the start of training camp. While in Washington, he made nine career tackles, one sack and an interception in nine appearances.

The son of legendary Dallas Cowboys linebacker Jim Jeffcoat was the Longhorns’ third highest-rated recruit of the modern recruiting era coming out of Plano West High School. Despite a season-ending injury his junior year, Jeffcoat’s 27.5 career sacks rank seventh in program history. As a senior, he was a consensus All-American and won the Hendricks Award as the nation’s best defensive end.

Winnipeg finished third in the CFL’s West Division last year with a record of 11-7. The CFL season kicks off June 22.

Bohls: What’s this about a water feature in a remodeled Texas football locker room?