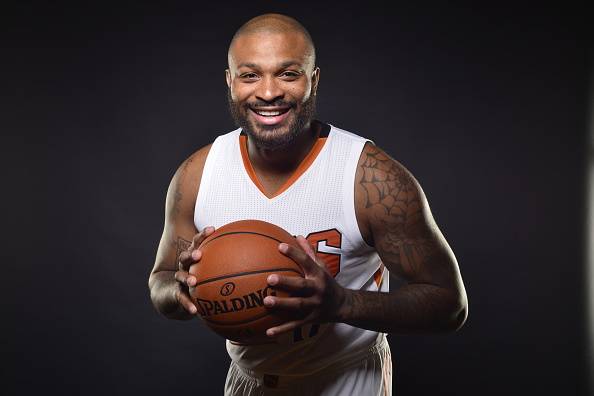 PHOENIX, AZ - SEPTEMBER 26: P.J. Tucker #17 of the Phoenix Suns poses for a portrait at the 2016-2017 team media day on September 26, 2016, at Talking Stick Resort Arena in Phoenix, Arizona. NOTE TO USER: User expressly acknowledges and agrees that, by downloading and or using this Photograph, user is consenting to the terms and conditions of the Getty Images License Agreement. Mandatory Copyright Notice: Copyright 2016 NBAE (Photo by Barry Gossage/NBAE via Getty Images)

In a last-minute move before the NBA trade deadline, the Phoenix Suns reportedly traded Tucker to the Toronto Raptors for Jared Sullinger and 2017 and 2018 second-round draft picks. Adrian Wajnarowski from The Vertical was first to report the news.

“I can’t do nothing but be thankful to Phoenix for giving me my shot to make it back in this league and make a name for myself,” Tucker said in an interview with Phoenix media. “It’s always nice to hear about people wanting you and trading you, but when it actually happens it’s a whole different feeling that comes over you.”

Tucker, who played for the Longhorns from 2003 to 2006 and was the 2005-06 Big 12 Player of the Year, is averaging 7.0 points and 6.0 rebounds this season for the last-place Suns. The Raptors currently sit fourth in the Eastern Conference, seven games back from the first-place Cleveland Cavaliers.

Toronto made it to the Eastern Conference Finals last season before falling to the Cavs.

Tucker arrived in Phoenix in 2012 after bouncing around overseas for five years. This will be his second stint in Toronto, where he played his rookie season after being drafted 35th overall in 2006.