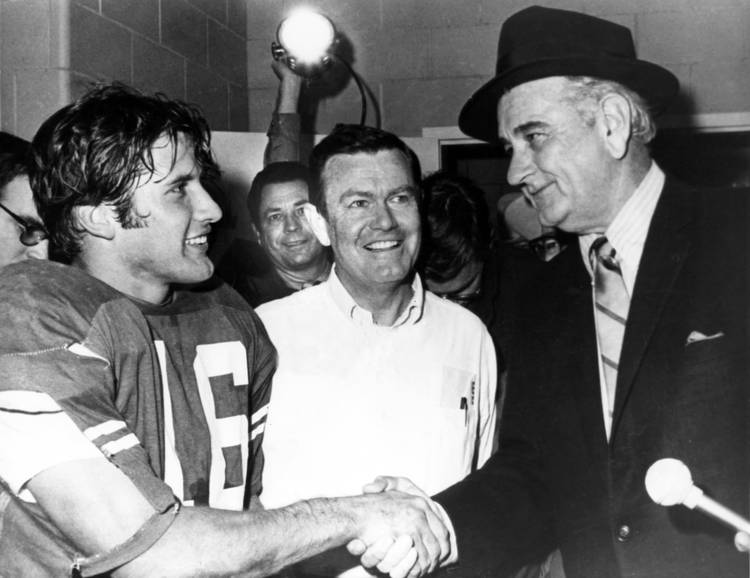 In 50 days, Texas football fans will get their first glimpse of Tom Herman’s Longhorn football team on April 15.

There’s not a whole lot you can learn from the spring game, but there was last season. Shane Buechele blew most fans away with his play in the spring game and there weren’t many people who left Royal-Memorial Stadium that Saturday believing Buechele wouldn’t be a factor in Texas 2016 quarterbacking plans.

In honor of spring football, we’re counting down the days till the Spring game with 50 facts for 50 days.

Longhorn baseball enters a new era as David Pierce takes over the program from Augie Garrido, one of the greatest baseball coaches of all-time. Texas baseball began its season last week with a series against Rice and this weekend they face the University of Connecticut in the second homestand of the season.

Here are a few things you need know about the connection between the Texas baseball program and the Texas football program.

3 times they shared a head coach

Maurice Gordon Clarke, Ralph Hutchinson and H.R. Schenker all served as both the football coach and baseball coach during the same school year. Part of this was the era. All three were in Austin from 1899-1906. Texas, according to campus history, was so tired of hiring new coaches every fall, so in 1903 the UT Board of Regents established the “outdoor athletic director”  job. This person would be the head coach of  football, track and baseball.

Disch-Falk Field is partly named after a coach who from 1911-1939 won 513 games, William “Uncle Billy” Disch. He took over the program in 1911 and baseball writers referred to him as the “Connie Mack of college baseball” which for the kids today would be like calling him the “Joe Maddon of college baseball.”

But Disch didn’t just coach baseball.  From 1911-1912, Disch was an assistant coach for the football team, one of only two assistants listed on staff in those seasons.

James Street was an All-Southwest Conference football selection in 1969 and the starting quarterback for Darrell Royal’s second national championship team at Texas. He holds the record for the longest passing touchdown in Texas bowl game history with a 79-yard throw. He was 20-0 as the starting quarterback. He holds the record for most yards per play in Cotton Bowl history. He is a member of the Cotton Bowl Hall of Fame, because if he wasn’t, there shouldn’t be a Cotton Bowl Hall of Fame.

Street made four consecutive All-Southwest teams in baseball and led the Longhorns to three College World Series appearances. Street threw the only perfect game in Texas baseball history. He has two no-hitters. He graduated with the most complete games and the lowest opponent batting average in school history.  Street was drafted by the Cleveland Indians, but an injury in the 1970 College World Series effectively ended his baseball career.

While Street never led Texas baseball to a national title, his son did. Huston Street helped the Longhorns win it all in 2002, earning the MVP trophy of the tournament. A year later, he led Texas back to the CWS. In 2010, Huston Street was named to the NCAA College World Series Legends Teams.

Another Street child, Juston Street, also played for Texas baseball before going into acting, where he played his father in the movie “My All-American.”

When Texas baseball reaches the CWS, Texas football usually has a good year

What’s even more bizarre: In 2009, Texas baseball was the NCAA runner-up. What happened to Texas football in 2009? That’s right. Texas was runner-up.