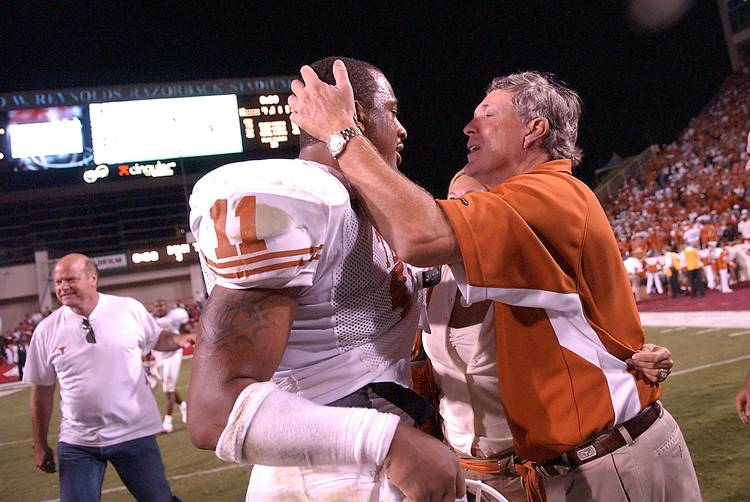 In 49 days, Texas football fans will get their first glimpse of Tom Herman’s Longhorn football team on April 15. In honor of spring football, we’re counting down the days till the spring game with 50 facts for 50 days.

Lately it seems defenses in the Big 12 have become known more for missing tackles than making them. Even Texas has fallen victim to the epidemic.

But that wasn’t always the case. The Longhorns of years past featured some of the most fierce defenders in all of college football; the types of guys that made running backs and wide receivers want to run the other way.

Here are the five who put the most opponents on the ground.

You’d expect to find all linebackers on this list, and the top four are. But Carter, a product of Tyler, Texas, piled up 401 tackles while playing safety for the Longhorns from 1993 to 1996. Unsurprisingly, those teams were a far cry from the best defensive units in Longhorns lore, but who knows were they would have been without Carter. He played six seasons in the NFL with the Patriots, Bengals and Texans.

From 1989 to 1992, few opponents made it past Curl. The Houston native out of Aldine MacArthur High School made 403 career tackles from his linebacker spot.

Johnson’s 458 stops from 2001 to 2004 were only the start of his illustrious career. Since leaving the 40 Acres, he has endeared himself to Kansas City Chiefs fans by making a team-record 1,080 tackles and counting. All totaled, that’s more than 1,500 tackles in 16 years. Johnson is also Texas’ all-time leader in tackles for loss with 65. Remarkably, he left without cracking the top 11 for tackles in a season. Consistency was, and still is, his hallmark.

They don’t come much meaner than Doug Shankle. As a junior in 1980, the 6-foot, 230-pound native of Silsbee recorded 144 of his 478 career tackles. He didn’t need much help, either. Shankle remains the Longhorns’ all-time leader in solo stops with 325.

Texas’ tackle king has been thrust back in the spotlight with son Breckyn Hager currently making his own name on the Longhorns defensive line. The youngest of the four Hager boys displays plenty of the fire, and penchant for big hits, that made Britt a fan favorite from 1984 to 1988. He made 499 tackles at Texas before a nine-year NFL career. Another of his sons, Bryce, starred at Baylor and is now with the Los Angeles Rams.