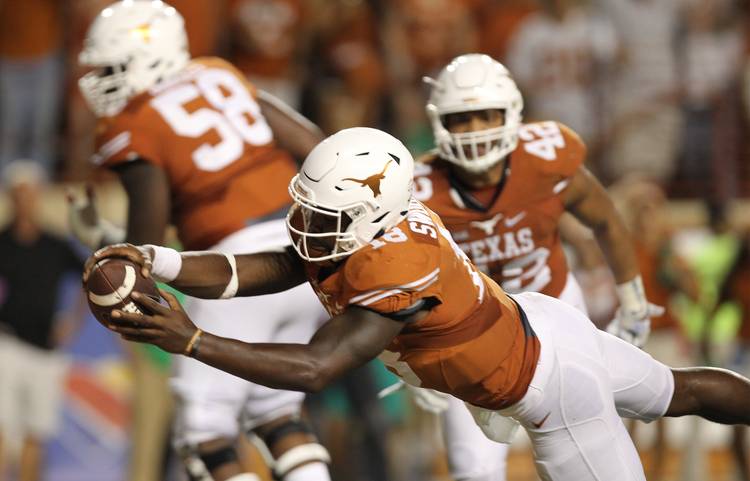 Texas quarterback Tyrone Swoopes dives into the endzone for a touchdown for an overtime Texas victory over Notre Dame, 50-47 at Royal-Memorial Stadium in Austin, TX. STEPHEN SPILLMAN FOR AMERICAN-STATESMAN

All those rumblings during the season have turned to reality for Tyrone Swoopes. The former Texas quarterback is currently training to become an NFL tight end.

In a video posted by FOX Sports: PROcast on Twitter, Swoopes was seen working out at the Michael Johnson Performance center in McKinney.

“The transition is going well,” he said. “I’m training here at MJP for the 2017 draft. Everything is going well, I’m excited for pro day.”

Swoopes initially downplayed the idea of switching positions back in September when draft analyst Charlie Campbell projected that the 6-foot, 4-inch, 249-pound quarterback could be a fourth-round pick at tight end.

“I feel like I have pretty good hands,” Swoopes said then. “Of course, if I were to do something right now, I wouldn’t be able to do what I needed to do to be successful.”

He finished out the season at quarterback in the Longhorns’ 18-Wheeler package, even making a brief cameo at running back due to a lack of depth behind D’Onta Foreman. Swoopes finished his Texas career with 3,038 passing yards, 966 rushing yards and 41 total touchdowns.

He never caught a pass, though, and without an invite the the NFL Scouting Combine his pro day will likely be the only remaining opportunity to show off that skill set. He also participated in the College Gridiron Showcase in January.

There are several recent examples of college quarterbacks successfully switching positions to play in the NFL. Former Ohio State signal-caller Terrelle Pryor just had a career year with the Cleveland Browns, and Logan Thomas has bounced around the league as a tight end since his days at Virginia Tech.

Currently CBS Sports lists Swoopes as the No. 36 tight end in the draft class and the No. 664 prospect overall.