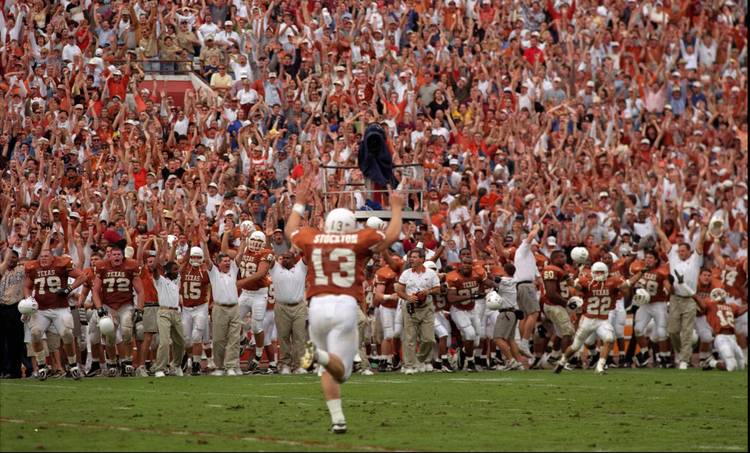 Sung park/AA-S 11/27/98 UT kicker Kris Stockton runs for a zillion open arms waiting to congratulate him on the game-winning kick against the Aggies in the final seconds of the game.

In 48 days, Texas football fans will get their first glimpse of Tom Herman’s Longhorn football team on April 15. In honor of spring football, we’re counting down the days till the spring game with 50 facts for 50 days.

Tom Herman’s first signing as Texas coach was junior college kicker Joshua Rowland, who will suit up in burnt orange and white for the first time on April 15.

RELATED COVERAGE: Josh Rowland should be reliable for Texas

Kicking was an issue under Charlie Strong, and Longhorns fans will be anxious to see if Rowland inspires more confidence. After all, they’ve been spoiled over the years.

Local product Justin Tucker, for example, has become one of the most accurate kickers in the history of football. You won’t find him on this list, though, even if he did make “The Kick.” Tucker didn’t get the starting job until his junior year, which meant he only made 40 career field goals.

So, who racked up the most 3-pointers for the Longhorns?

Erxleben made 49 of 78 kicks between 1975 and 1978, including a 67-yarder which is still tied for the longest in NCAA history. In fact, Erxleben lays claim to eight of the nine longest field goals in Texas history. The warm fuzzies end there, as he has since been convicted twice for financial fraud.

Mangum made 50 of 73 attempts during his career from 2001 to 2004, and is most remembered for his kick to beat Michigan in the 2005 Rose Bowl. He also holds the record for most points scored by a Longhorns kicker with 358.

Before he became a Cleveland Browns legend, Dawson booted 59 field goals wearing a different shade of orange. From 1994 to 1997, he attempted a school record 79 field goals and racked up 339 career points. Now 42 years old, Dawson is the longest tenured Longhorn left in the NFL. He just finished up his 18th season — the first 14 in Cleveland and the past four with the San Francisco 49ers. It’s hard to believe this fall will mark 22 years since his 50-yarder that beat Virginia.