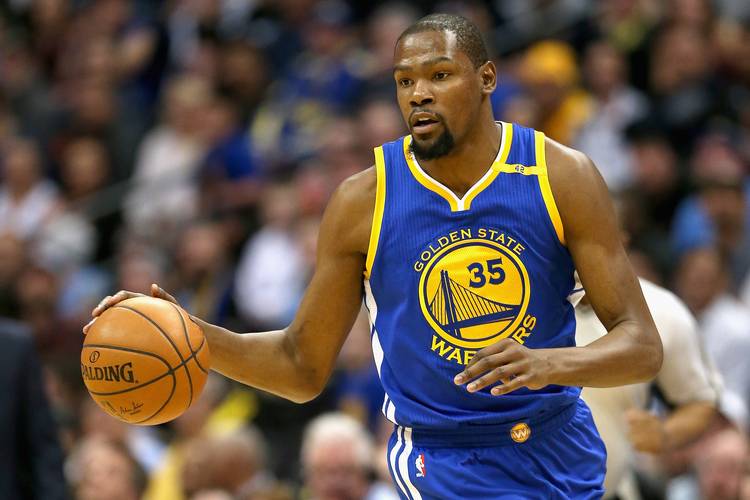 OAKLAND, Calif. — Kevin Durant is down for the immediate future with a knee injury, and that’s a huge blow on both ends of the floor for the playoff-bound, championship-chasing Golden State Warriors.

Stephen Curry and Co. are going to have to carry on without KD perhaps for the remainder of the regular season — and maybe longer.

Durant will be out indefinitely after he sprained the medial collateral ligament in his left knee and bruised a bone in his leg during Tuesday night’s loss at Washington, leaving the Warriors without their shot-blocking big man who also does it all on offense.

“Heal up my Man…we will hold it down til your back on the court with us. Prayers up!” Curry, the two-time reigning MVP, posted Wednesday on Twitter.

The NBA’s top team will push toward the playoffs without its leading scorer and rebounder. For the month of March, at least.

The Warriors said Wednesday that their medical staff hasn’t ruled out a Durant return before the end of the regular season, though nobody is predicting at this stage.

“At this time it’s just speculation to guess when that is,” general manager Bob Myers said in a conference call. “He’ll heal as his body heals. And when he’s healed and our doctors clear him and we feel like it’s safe, he’ll play. I want to know as much as you guys but at this point the plan is just to reevaluate him and see where he’s at in four weeks.”

The All-Star forward hyperextended his knee early in the Warriors’ 112-108 loss to the Wizards and later underwent an MRI exam, which revealed a Grade 2 — or moderate — sprain in the knee as well as a bruised tibia.

Durant is scheduled to be reevaluated in four weeks, so if he is fully healthy then, that would leave about two weeks remaining in the regular season. He was scheduled to return to the Bay Area on Wednesday and immediately begin rehabilitation. The Warriors headed for Chicago to continue a grueling stretch of eight games in 13 days with a cross-country trip. They return to Oakland for one game then a back-to-back at Minnesota and San Antonio on March 10-11.

On a Wizards possession under their basket less than a minute into the game, Washington center Marcin Gortat pushed Warriors center Zaza Pachulia, who fell into Durant’s left leg. While Myers isn’t on the trip and only saw the play on TV, he said the team’s video staff might have other angles he can see — though in speaking to Durant there wasn’t immediate concern about the play being intentional.

“These things happen in sports,” Myers said. “Nobody’s raised that question on our side. I don’t know if it’s being raised outside of us. I spoke to Kevin a couple times. Other than just being disappointed that he’s injured, nobody’s mentioned anything like that.”

The Warriors became the earliest team in NBA history to clinch a playoff berth when they beat the Nets on Saturday and are now focused on locking up the No. 1 seed in the Western Conference.

LeBron James, whose Cleveland team beat the Warriors in Game 7 for last year’s championship before Durant came from Oklahoma City, saw the injury.

Durant leads the Warriors in scoring and rebounding with 25.3 points and 8.2 boards along with 4.8 assists in his first season with Golden State. At 50-10, the Warriors have the NBA’s best record.

Myers expects the Warriors to fill the 15th spot on the roster in the next 24 to 48 hours, though Matt Barnes posted a photo on his Instagram account from his first stint with the Warriors and this: “You know you’re strong when you’re helping ppl through their storms while going through your own that’s strength.”

Myers declined to provide names in the mix.

“These things are very fluid this time of year or any time of year to be honest. Injuries happen unexpectedly,” he said. “We have to take another look at what our roster needs. I’m not going to get into specifics. We have to look and see where we need the most depth in light of this recent occurrence. We’re in the process of doing that and should have some resolution in the next 24 to 48 hours. … Last night showed that you have to be able to pivot in the course of an NBA season. We’ll do our best with the options available to keep the roster in the best shape we can.”