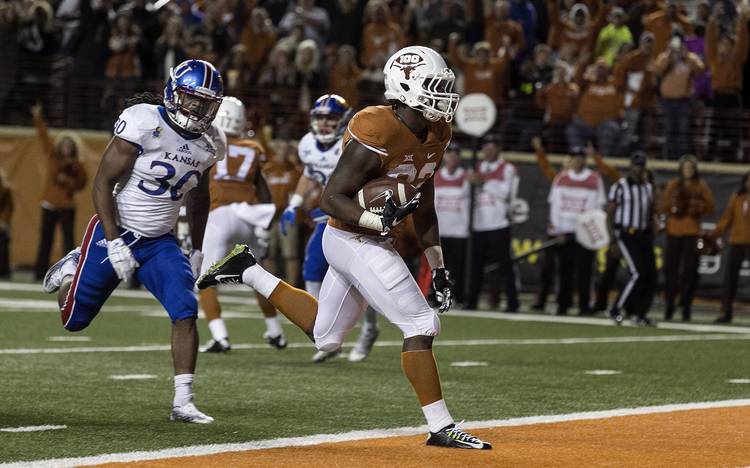 November 7, 2015 - Texas (33) D'Onta Foreman, running back, rushes into the endzone for a touchdown as Kansas (30) Tevin Shaw, safety, looks on during the second half of Big 12 action held at Darrell K Royal- Texas Memorial Stadium in Austin, Texas, on Saturday, Nov. 7, 2015. RODOLFO GONZALEZ / AUSTIN AMERICAN-STATESMAN

In 44 days, Texas football fans will get their first glimpse of Tom Herman’s Longhorn football team on April 15. In honor of spring football, we’re counting down the days till the spring game with 50 facts for 50 days.

Highlights weren’t invented with the internet, or even TV, even if it may seem like it. Sports have always left lasting memories of greatness to be repackaged and shared with the masses.

You won’t find the two longest run plays in Texas history on YouTube, but maybe it’s better that way. The tales of Bohn Hilliard and Chris Gilbert’s jaunts likely outgrew reality over time. Now we’re left to paint our own images of what they may have looked like.

In 1992, well before Tom Herman had any affiliation with either school, the Longhorns and Cougars contested a wild affair in Austin. It all started with Walker’s 88-yard score in the first quarter, which commenced 28 unanswered points by Texas in the first half. Houston came all the way back to take a 38-31 lead in the fourth quarter, but the Longhorns won on a pick-six by Norman Watkins off David Klingler.

Luckily for Warren, this one is easily searchable. Because if you heard a description of it, you’d be likely to dismiss it as exaggeration. Seven different Red Raiders got a piece of the freshman, starting two yards behind the line of scrimmage. He barely even slowed down.

Texas won five games in 2015, but it had two touchdowns of 90-plus yards. Given what we witnessed in 2016, the analysis at the end of this play sounds like prophecy.

As legend has it, Hilliard collapsed after he jaunted 94 yards in the 1934 season opener against Texas Tech. Luckily for the Longhorns, he recovered in time to score the game-winning touchdown — and kick the extra point — that allowed coach Jack Chevigny to beat his alma mater the following week. That’s still the only time Texas has beaten Notre Dame in South Bend.

Gilbert left Texas in 1968 as the most prolific rusher in the history of the program. Then came Earl Campbell, Ricky Williams, Cedric Benson and Jamaal Charles. Yet through all the great Longhorn runners, one of Gilbert’s records has survived: a 96-yard burst against TCU from Nov. 18, 1967.

Episode 46 of On Second Thought: Texas Ex Brian Robison on the 2005 championship and his career in the NFL