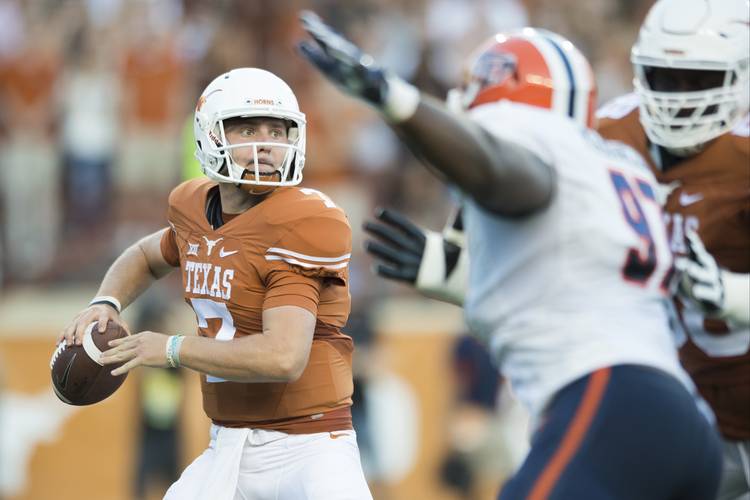 Shane Buechele (7) of the Texas Longhorns drops back to pass against the UTEP Miners during the first half on September 10, 2016 at Royal Memorial Stadium in Austin, Texas. (Photo by Cooper Neill/Getty Images)

In 43 days, Texas football fans will get their first glimpse of Tom Herman’s Longhorn football team on April 15. In honor of spring football, we’re counting down the days till the spring game with 50 facts for 50 days.

When D’Onta Foreman ran for 341 yards against Texas Tech last season, it broke a streak of 234 games. That was how long it had been since a Texas player surpassed 300 rushing yards in a game. Ricky Williams famously did it twice in back-to-back games on the way to claiming the Heisman Trophy in 1998.

Streaks are meant to be broken, but often it is difficult to realize when one might be in jeopardy. Here are five to remember if you want to impress your friends come fall.

Shane Buechele looks like the real deal. He passed for 200-plus yards nine times in 2016, including a career best 318 yards against West Virginia on Nov. 12. Only three Texas quarterbacks have ever thrown for 400 yards in a game: Colt McCoy and Major Applewhite twice and Chris Simms once.

McCoy’s last such performance came on Nov. 7, 2009, when he picked apart Central Florida for 470 yards in a 35-3 victory. He completed 33 of 42 passes for two touchdowns, including an 88-yard bomb to Jordan Shipley in the fourth quarter. The Longhorns have played 93 games since.

Staying along the Buechele/McCoy theme, this one also seems attainable. Buechele threw for four touchdowns in his second-ever start against UTEP, breaking a three-year streak. McCoy holds the school record with the six touchdowns he threw against Baylor as a redshirt freshman in 2006 (134 games), and he’s the last Longhorn to throw five — also against the Bears, in 2008 (105 games).

Greg Lott had a flair for the dramatic, so perhaps it’s no surprise he is the holder of one of the longest streaks on the Texas books. The former Longhorns quarterback and wingback had a longtime romantic connection to acclaimed actress Farah Fawcett and was convicted of two drug-related felonies in the late ’70s and early ’80s. He also opened the Sept. 24, 1966 game against Texas Tech with an 88-yard kickoff return to the house, some 610 Texas games ago.

Three Texas running backs have accomplished this feat since an opponent last did it. Keeping this streak alive means keeping former Colorado star Rashaan Salaam in the UT record book. Salaam ran for 317 yards against the Longhorns in 1994, part of his Heisman Trophy-winning season. Texas has played 289 games since then.

These past few years have brought plenty of heartbreak and embarrassment, but nothing to match the Nov. 6, 1976 disaster against Houston. The Longhorns fell 30-0. They haven’t been shut out at home since, a streak which sits at 230 home games.

Texas baseball notches first shutout of the season, 4-0 over No. 19 Stanford