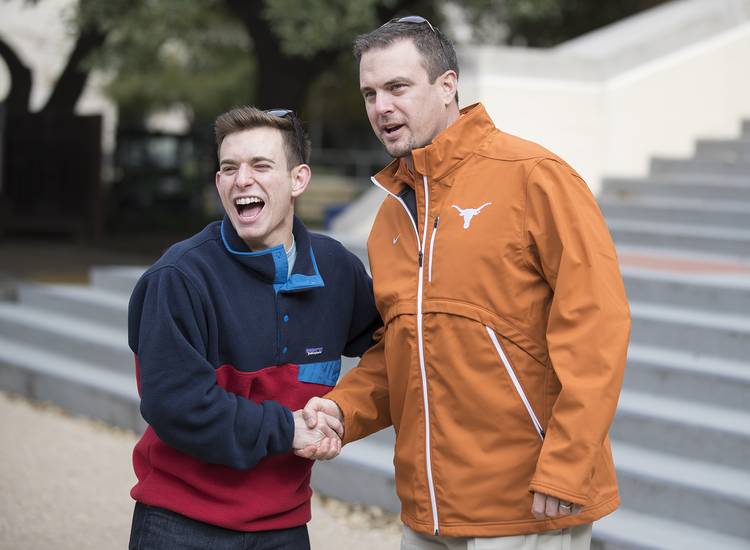 Tom Herman has referred the three seasons he spent under Urban Meyer at Ohio State as “head coaching school.”

Texas staff members Tim Beck and Stan Drayton also went to Meyer’s academy, and it appears the trio is set to apply one of their old boss’s lesson plans in Austin. On Friday, Beck sent out a call for University of Texas students to join the Longhorns for a “Student Appreciation Practice” on March 25 at Royal-Memorial Stadium.

“Calling ALL students — come check us out — a practice especially for you !!! BRING THE JUICE !” the Texas offensive coordinator tweeted.

Calling ALL Students – come check us out – a practice especially for you !!! BRING THE JUICE ! #ThisisTexas #Weplayforyou #JUICE pic.twitter.com/MezhP2UzFk

If this is anything like the event the Buckeyes put on each spring and the one Herman hosted during his two years at Houston, UT students are in for a treat. This is far from an invite to watch tackling drills from the stands.

Last year, Houston held a “Fastest Student” competition with finalists getting a chance to race current players and  the winner receiving a trip for two to the Cougars’ away game at Texas State. Students also got to join the team on the field at TDECU Stadium.

Herman has already set a precedent of reaching out to the student body. Back in December he spent a full hour handing out pizza to students preparing for final exams.

“I want them to know that we play for them and we take that job very seriously.”

When it comes to Tom Herman’s top 5 rappers, it’s complicated