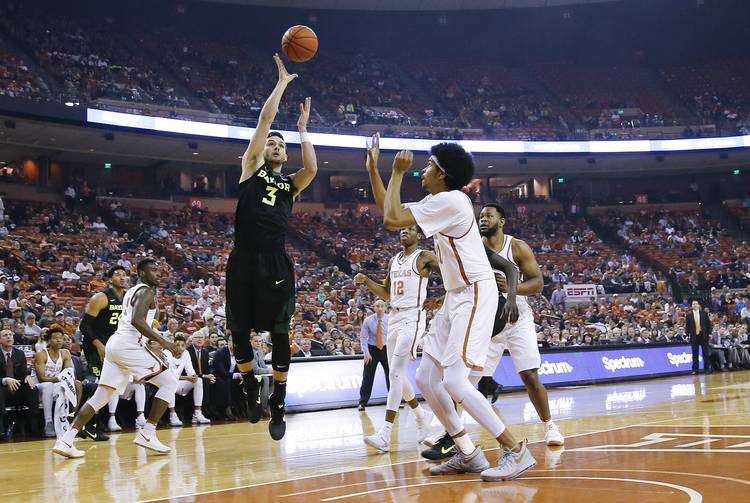 Jake Lindsey #3 of the Baylor Bears shoots over Jarrett Allen #31 of the Texas Longhorns at the Frank Erwin Center on March 4, 2017 in Austin, Texas. (Photo by Chris Covatta/Getty Images)

At least Texas is no longer in an embarrassing free fall. After losing seven straight, the Longhorns have finally crashed to the bottom.

A team picked to finish third in the Big 12 race finished the regular season in last place thanks to Saturday’s 75-64 loss to No. 11 Baylor at the Erwin Center.

Texas and Oklahoma entered the final day of the regular season tied for ninth, and the Longhorns actually held the tie-breaker. But OU captured a 73-68 win over TCU on Saturday at Lloyd Noble Center, giving the Sooners a leg up for the ninth spot in the 10-team league.

Jarrett Allen shined in what was truly a nondescript game in this lost season for Texas (10-21, 4-14 Big 12) Baylor got multiple contributions from key players as starting guard Manu Lecomte sat with an ankle injury as a precaution. The Bears (24-6, 12-6) hit nine of 20 from 3-point range and were in cruise control for most of the day.

Those inside the UT basketball program have no real solid feeling one way or the other on Allen. The talented freshman’s name hasn’t been included in most NBA mock drafts, but that could change soon. Allen thinks differently; he loves taking apart laptop computers, for example. So a decision may not come soon.

If this was Allen’s last home game at Texas, it was one to remember. He racked up 16 of his 20 points in the first half, grabbed nine rebounds total and had a monster block.

Get out of my house! 👋 pic.twitter.com/lJncEqTWmL

Coach Shaka Smart allowed all three seniors — Shaq Cleare, Kendal Yancy and Mo Isom — to go into the starting lineup. All three players were honored before the game, and school officials hung their jerseys in the rafters with a message “Thank You 2017 Seniors.” Cleare finished with 14 points and a career-high nine rebounds. He fouled out of the game with less than three minutes remaining to a loud standing ovation.

Former Texas swingman Tevin Mack, who was essentially dismissed from the team in January, tweeted an image during the first half that symbolized trash. It was quickly deleted. But you could feel the fans’ frustration in the first half as the Longhorns had 10 turnovers, leading to 14 Bears points.

The Longhorns are headed to the Big 12 tournament at Sprint Center in Kansas City, Mo. Texas will be the No. 10 seed in the event and will face No. 7 seed Texas Tech at approximately 8 p.m. Wednesday in a first-round matchup. The two teams split the regular-season series, each winning on their respective home floors.

To reach the NCAA Tournament, Texas would have to win the Big 12 tournament. No team has ever won four games in four days in league tournament history.