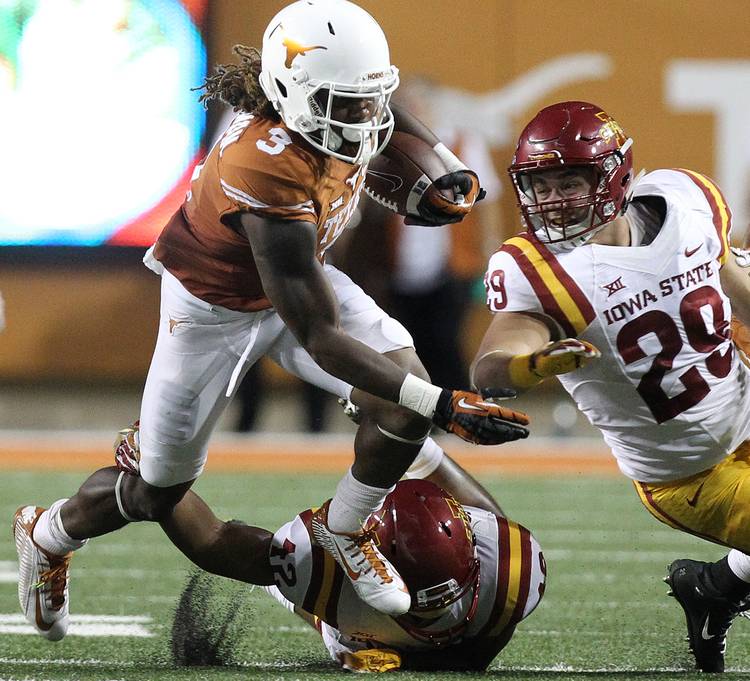 In 41 days, Texas football fans will get their first glimpse of Tom Herman’s Longhorn football team on April 15. In honor of spring football, we’re counting down the days till the spring game with 50 facts for 50 days.

The receiving corps will be among the deepest units on this year’s team, with the top three targets by yardage (Armanti Foreman, Devin Duvernay and Dorian Leonard) all returning. Jerrod Heard has now played the position for a full year, and freak athlete Collin Johnson appears primed for a breakout season. Not to mention John Burt and Lorenzo Joe.

Combine that speed and depth with the maturing arm of quarterback Shane Buechele, and Longhorns fans should feel excited about the potential of the passing game in 2017.

Here’s a look back at what the receivers accomplished in 2016, by the numbers:

The most receiving yards by a Longhorn during a single game in 2016. Armanti Foreman only caught four passes against Baylor, but he made them count with a 40-yard touchdown from Shane Buechele in the first quarter and another 51-yard grab.

Consecutive games with a touchdown for Devin Duvernay against Oklahoma, Kansas State and Iowa State — tied for the seventh-longest streak in school history. Jordan Shipley holds the record with eight in 2008.

Yards per reception for Duvernay, who only caught 20 passes but still finished second on the team with 412 receiving yards. In consecutive games, he caught touchdown passes of 63, 75 and 80 yards. Had he made four more catches, the freshman speedster likely would have landed in the top 10 in FBS for yards per reception.

Receiving yards by Foreman, who led the team. That is the lowest output by a Longhorns leading receiver since Kwame Cavil paced the 1997 receiving corps with 316 yards. It should be noted that Texas relied heavily on the run game behind 2,000-yard back D’Onta Foreman, and six receivers had at least 300 yards.