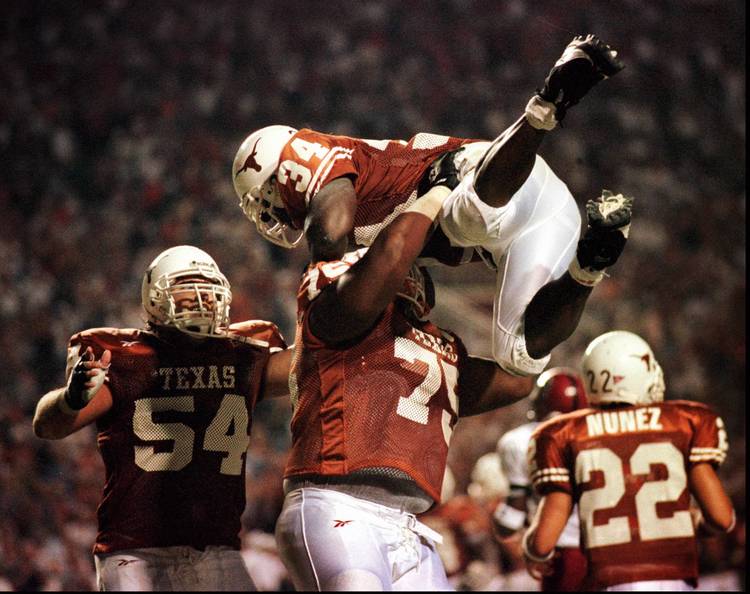 Running back Ricky Williams leaps into the arms of Octavious Bishop as they celebrate a touchdown against New Mexico State in 1998. Now, Bishop could join the UT football staff.

The countdown to the Texas Spring Football Game continues, and today we’ll make sure we get to the point.

In 2013, Anthony Fera scored 17 points in a game, tying Ryan Bailey, Kris Stockton and Phil Dawson for the most by a Texas kicker in a single game. Kickers often pile on the scoring numbers because if a team scores a touchdown, a kicker usually puts points on the board. If a team isn’t shutout, usually the kicker played a role.

But what about non-kickers? What are the numbers? Well, here we go, six stats about Texas scorers you should know:

The all-time scoring leader at Texas

It’s not a kicker!

Of the top 10 scorers in Texas history,  five are kickers (Mangum, Dawson, Stockton, Jeff Ward and Russell Erxleben). Earl Campbell (8), Roy Williams (9) and Jamaal Charles (10) round out the top 10.

Most points scored in a game

Williams twice scored 36 points in a game. And he did it in the same month as well. Williams broke Bobby Layne’s record of 28 points in 1997 when he scored 30 against Rice. A year later, he broke that record with 36 against New Mexico State. He tied his record three weeks later with another 36-point outing against Rice. Williams scored at least 30 points in a game four times in his career.

Only two other players surpassed Layne’s original record set in the 1946 Cotton Bowl, Cedric Benson in 2004 against Oklahoma State with 30 points and Joe Bergeron with 30 in 2012 against Baylor.

The big number is 24. There are 23 players who scored at least 24 points in a game in Texas history. Vince Young did it twice, including in the 2005 Rose Bowl. Young and Layne are the only ones to have these historically high-scoring games in a bowl.

Most points in a season

Obviously this is Williams’ senior season. He scored 36 twice and 30 against Iowa State, the first of three Longhorns to score 30 in a Big 12 game.. He finished the 1998 season with 168 points, 16 points more than the previous record, which he set a year earlier.

Benson’s 2003 season is third on the list as he scored 134 points. Kicker Hunter Lawrence nearly overtook Benson with a 133-point season in 2009

Williams, however, is unsurprisingly the record holder for most touchdowns scored in a game (six against Rice and New Mexico State in 1998), season (28 in 1998) and career (75).

Mangum, Dawson, Stockton, Ward and Erxleben are the five highest scoring kickers in Texas history. We were surprised as well that Justin Tucker is not on the list. Lawrence’s 133 points in 2009 is the most by a kicker by nearly 20 points.

D’Onta Foreman had a historic season at Texas in 2016. But not historic in scoring. He was 18 points shy of the top-10 mark with 90 points and was only five points ahead of much maligned kicker Trent Domingue, who scored 85. After those two there’s a sharp drop off with Tyrone Swoopes’ 42 points as third on the team.

The highest-scoring returning players are a collection of six who scored 18 points, including Jerrod Heard and Devin Duvernay.