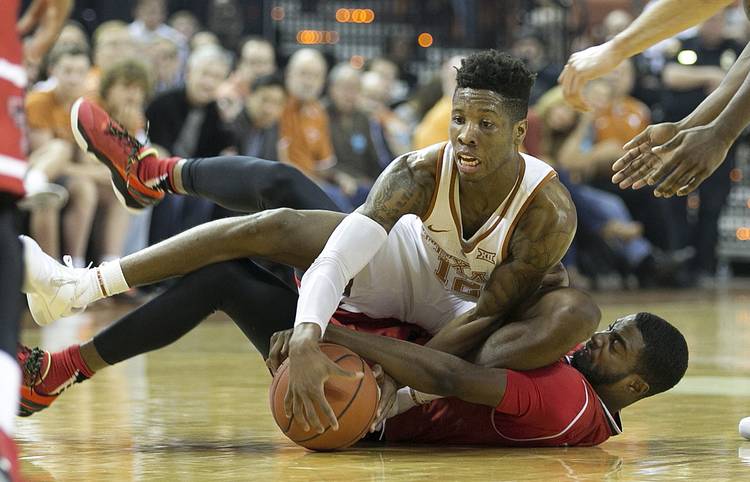 Texas guard Kerwin Roach Jr., battles with Texas Tech's Niem Stevenson during the first half of their game at the Erwin Center on Wednesday, February 1, 2017. DEBORAH CANNON / AMERICAN-STATESMAN

Series history: Texas leads the all-time series 84-56. The two teams split the regular season series. The Longhorns won 62-58 in Austin on Feb. 2. The Red Raiders won the rematch 67-57 in Lubbock on March 1.

About the Longhorns: Freshman Jarrett Allen was named a third-team All-Big 12 selection, as voted on by the league’s coaches, and selected for the All-Newcomer team. He ranks third in the league in rebounding (8.5) and has a team-high 48 blocks. … His frontcourt teammate, senior Shaq Cleare, averaged 14.5 points and six rebounds in the last two games of the regular season. … The Longhorns have a 24-20 record at the Big 12 tournament. They have also reached the semifinal round in 13 out of 20 appearances. Texas reached the title game five times under former coach Rick Barnes, most recently in 2011. … In this unpredictable season, 14 of UT’s 31 games have been decided by five points or less. UT is 5-9 in those games this season.

About the Red Raiders: Just like UT’s Allen, Tech’s Keenan Evans was named third-team All-Big 12 by the league’s coaches, and Zach Smith was an honorable mention selection. Evans is the first Red Raider to land on the coach’s All-Big 12 team in three years. He averaged 16.9 points in league play, the highest total since Jarrius Jackson put up 19.1 during the 2006-07 season. … After the Red Raiders beat the Longhorns on March 1, they went into an offensive funk in a 61-48 loss Saturday at Kansas State. The team’s 48 points was a season low as Tech made only 16 field goals and shot 35 percent overall. “Some days it looks pretty good and other days it does not. We will just get back to work,” Tech coach Chris Beard said. …  Tech has lost 11 straight Big 12 road games.