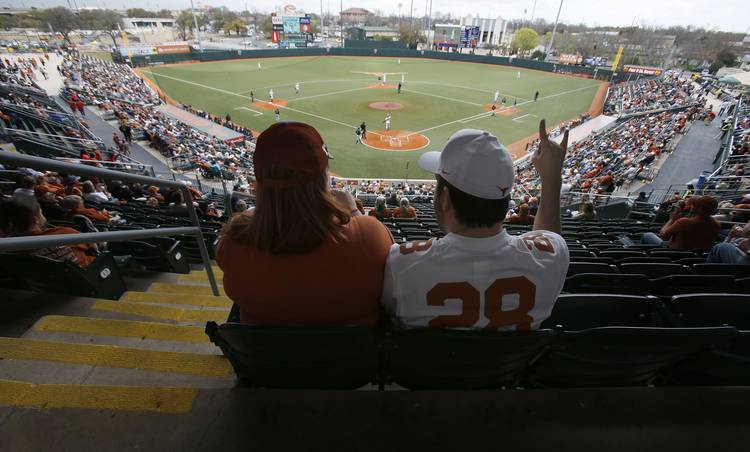 Texas? fans Brittany Author, left, and Ryan Beckendof cheer as the Longhorns get another out against California Bears during a NCAA college baseball game at Disch-Falk Field, Sunday, March 6, 2015. (Stephen Spillman / for American-Statesman)

Richmond’s Spiders won’t be fully-armed when they travel to UFCU Disch-Falk Field on Tuesday night.

Last month, the Richmond Times-Dispatch reported that five of Richmond’s baseball players had been suspended for violating NCAA rules. The season-opening and indefinite bans reportedly revolved around those Spiders’ involvement in fantasy football.

According to the Times-Dispatch, NCAA rules state that athletes “are not eligible to compete if you knowingly participate in any sports wagering activity that involves intercollegiate, amateur or professional athletics, through a bookmaker, a parlay card or any other method employed by organized gambling.”

Richmond has not named its suspended Spiders, but the Times-Dispatch reported that two of the players were junior pitcher Keenan Bartlett and senior infielder Kurtis Brown. It is possible that Bartlett wouldn’t have appeared at UFCU Disch-Falk Field for a mid-week game anyways since he is one of Richmond’s top arms. Brown, though, hit .342 with 35 RBIs in 2016.

Richmond (3-7) is coming off of three losses at Texas State this past weekend. Two of those defeats were 18-3 and 13-2 blowouts.

Freshman Tim Miller (1-0; 2.45 ERA) will start for Richmond on Tuesday against Texas junior Connor Mayes (0-1; 6.23). Among the Austin-area products on Richmond’s roster are sophomores Brendan McGuigan and Kyle Schmidt. McGuigan is a St. Michael’s graduate who has thrown one inning of relief this season. Schmidt is a Smithville-raised catcher with a .375 batting average.

Following this past week’s road trip to Stanford, Texas (7-6) is looking to snap a three-game losing streak.