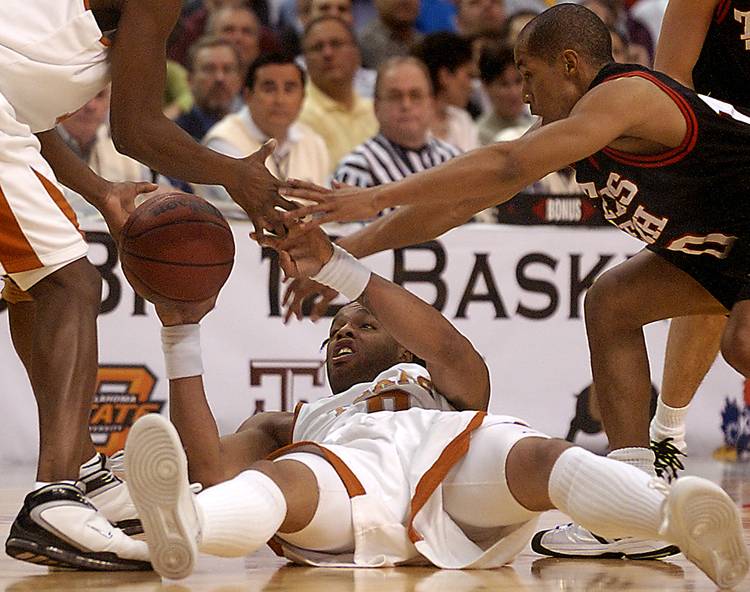 This week the 21st Big 12 Tournament begins, and Texas is in a weird place.

The Longhorns will have the lowest seed in the Big 12 Tournament after finishing last in the conference for the first time as a Big 12 member. It’s the lowest they finished since a 10th-place finish in 1997-1998, the last year of Tom Penders’ run at Texas. There were 12 teams in the league then.

The Longhorns just finished their worst season since the early 1980s, and they won’t be going to the NCAA, or NIT, or CBI, or whatever other participation-trophy tournament they have these days, unless they do something they’ve never done before: win the whole thing.

Let’s recap how Texas has done in the Big 12 Tournament:

It was a Border War final as Kansas, at the height of its Roy Williams dominance, savagely beat (spoiler alert) Missouri in the first championship game, 87-60. Paul Pierce was the was tournament MVP.

Texas had the No. 2 seed in the tournament and was 18-12 overall and 10-6 in the conference. Reggie Freeman was awesome that season, averaging 21 points, 7.6 rebounds and 4.2 assists. The problem? Texas’ first game in the tournament was against Missouri, who Texas had beaten 78-74 in January at home.

Texas reached the Sweet 16 in 1997, knocking off Wisconsin and Cinderella Coppin State. Louisville and coach Denny Crum ended the Longhorns season. Kansas also was upset in the Sweet 16 despite being the heavy favorite to win the title as Arizona, who won the title, beat three No. 1 seeds to win.

Kansas again won the tournament after once again winning the conference with a 15-1 record. The Big 12 has played 21 seasons of basketball. Kansas has won the league 17 times, including the last 13 (if you haven’t heard over and over and over again). This time the Jayhawks beat coach Kelvin Sampson and Oklahoma to win the title and Paul Pierce once again was the tournament MVP.

Texas went 14-17 in Tom Penders’ final season and finished 6-10 in the league. However, in Missouri’s role from the year before, the 10th-seeded Longhorns upset No. 2 seed Oklahoma State 65-62. This was stunning because coach Eddie Sutton’s team was a few weeks removed from crushing Texas in Stillwater, 80-58. Earlier in the season the Cowboys had beat Texas 88-73 in Austin.

Texas did not make the NCAA tournament, and champion Kansas was upset again, this time by Rhode Island.

Texas beat Colorado 82-76 in the second round, but Oklahoma State, the 5th-seed, exacted revenge from the previous season and beat Texas 59-57 in the semifinals.

Who won the tournament? That would be the pesky underdog three-seed, Kansas, the defending two-time tournament champion. The Jayhawks beat Oklahoma State 53-37 in the title game and Jeff Boschee was the MVP of the tournament.

Texas lost to Purdue in the first round of the NCAA Tournament. Tournament champion Kansas lost to defending national champion Kentucky in second round.

Best remembered as “the week that made NBA teams believe in Marcus Fizer,” Iowa State became the first team not from Lawrence, Kansas to win the Big 12 Tournament. Fizer was the Big 12 Player of the Year and the tournament MVP. Iowa State was the No. 1 seed, going into the tournament with a record of 14-2 in conference play and would finish 32-5 on the year under coach Larry Eustachy. After surviving Oklahoma State 68-64 in the semifinals, Iowa State beat Oklahoma 70-58 in the tournament final.

Texas was the No. 2 seed and went 24-9 and 13-3 in the Big 12. They lost to Iowa State 89-77 on the road in what would eventually settle the conference championship regular season title.

Texas crushed Colorado 78-35, then got crushed themselves by Oklahoma in the semifinals, 81-65. Texas lost in the second round of  the tournament to LSU, 72-68.

This was the first year Texas reached the Big 12 Tournament Championship Game.

Baylor, led by coach Dave Bliss, stunned top-seeded Iowa State 63-49 in the second round, opening the door for Texas. The Longhorns, led by Chris Owens and Darren Kelly, squeaked by Oklahoma State 55-54, then beat Baylor 76-62 in the semifinals.

Texas lost in the first round to Temple in the NCAA Tournament. Oklahoma did the same, falling to Indiana State. Kansas reached the Sweet 16, losing to Illinois, who was coached by Bill Self at the time.

Oklahoma, led by All-American Hollis Price, won the Big 12 Tournament three straight years. This is the middle title. The Sooners were the No. 2 seed and beat the No. 1 seed, and Big 12 regular season champion, Kansas, 64-55 in the final. Price was named the tournament MVP.

Kansas had been undefeated in conference play until losing to Oklahoma, and it’s 16-0 regular season is the best mark in league history.

Texas was led by standout freshman T.J. Ford and finished third in the conference with a 10-6 record and would finish 22-12 overall. The Longhorns beat Missouri 89-85 but lost in the semifinals to rival Oklahoma 67-51.

This season was a watershed moment for the Big 12. Not only did the conference send its first team to the Final Four, but it sent its first two teams to the Final Four. Oklahoma and Kansas both reached the semifinals. Making things even sweeter for the conference, Texas reached the Sweet 16 this season, beating Boston College and Mississippi State before falling to Oregon 72-70.

This was the first year the Big 12 Tournament left Kansas City as Dallas played host. But it had a similar results.

Texas would be upended in the second round by coach Bob Knight’s Texas Tech team, who almost did the same to Oklahoma in the next game, losing in overtime. Kansas was upset by rival Missouri 68-63 in the semifinals.

Obviously 2002-2003 is the best season of the Rick Barnes era. Texas went 13-3 in the Big 12, swept Oklahoma, lived in the top 10 of the AP poll and finished with a 26-7 record. Texas reached the Final Four behind a standout performance from Ford and joined fellow Big 12 team Kansas in the Final Four.

Once again held in Dallas, Oklahoma State picked up where Oklahoma started and won the next two tournaments. The Cowboys also made it three years in a row with a Big 12 team in the Final Four behind the play of Tony Allen (the Big 12 Tournament MVP), Joey Graham (a future Big 12 Tournament MVP) and John Lucas, an All-American. The Cowboys won the league with a 14-2 record and finished 31-4 on the year, losing in the national semifinals.

Texas didn’t really miss a beat after losing Ford to the NBA. The Longhorns went 24-8 and 12-4 in Big 12 play that season. Texas beat Kansas 82-67 in the regular season and again in the Big 12 Tournament semifinals 64-60.

The second win over the Jayhawks propelled Texas to it first Big 12 Tournament final. It didn’t end so well. The Cowboys beat Texas 65-49. However, the Longhorns reached the Sweet 16 later in the month.

Golden: Why are members of the Texas football team ’embarrassed’?