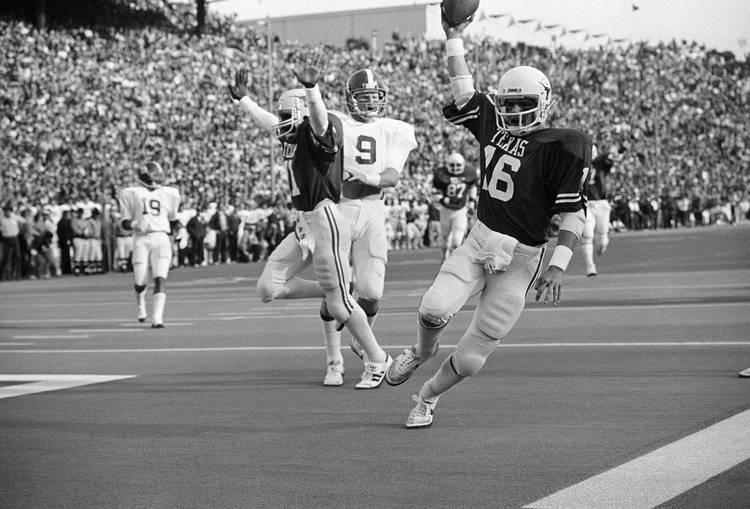 In 38 days, Texas football fans will get their first glimpse of Tom Herman’s Longhorn football team on April 15. In honor of spring football, we’re counting down the days till the spring game with 50 facts for 50 days.

If there is one thing Texas football has been known for over the years, it’s winning. Thanks in part to recently vacated wins by Notre Dame, the Longhorns now rank second all-time in college football history with 891 victories.

Even if Texas’ villain status has faded just a bit over recent years, there are still programs that cower in terror when they see the burnt orange and white. Of the more than 100 schools they have suited up against, the Longhorns can boast perfect records over 61 of them.

In the interest of weeding out cupcakes (sorry, UTEP) and defunct teams (Ream Flying Field?), we give you the five Power Five programs Texas has fared best against in five or more meetings. There are some heavyweights.

Brief summary: The Longhorns dominated the early years, racking up seven wins before the Red Raiders won in 1955 and eight more in a row after that. Tech joined the Southwest Conference a year later, and the schools were part of the formation of the Big 12 in 1996. That’s when the rivalry got the nickname “Chancellor’s Spurs,” and Texas has won 16 of 21 meetings since — including a 58-7 drubbing in 1999.

Most famous game: 2008 — No. 7 Texas Tech 39, No. 1 Texas 33. Sorry Texas fans, but you know it’s true. The wackiness of the Big 12 race that year and the timing of the game in November made it perhaps the most memorable Big 12 game ever played. The next time a Red Raider fan tries to rub it in your face, though, remember: history is on your side.

Brief summary: Recent history might make this inclusion surprising to young fans. The Cowboys have won five of the last seven after Longhorn domination. The schools met five times before the formation of the Big 12 — the last coming in 1968 — and Texas won 12 in a row from 1998 to 2009.

Most famous game: Without forgetting about Kris Stockton’s game-winning field goal in 1998, it has to be the 2005 comeback in Stillwater. Trailing by 19 in the first half on TBS of all channels, Vince Young put the eventual national champions on his back to the tune of 42 unanswered points. When Young says “Make Vince Great Again,” this is what he’s talking about.

Brief summary: Too soon? Before last fall’s embarrassment, the Jayhawks had last beaten Texas in 1938. The Longhorns have still never lost to Kansas at home, and blowouts have been the norm. Losing to the Jayhawks? Yeah, that’ll get you fired.

Brief summary: Here’s a nifty piece of bar trivia for you: Of teams Alabama has played at least four times, none has a better winning percentage than Texas. Now, their last meeting did not go so well, but until the 2010 BCS National Championship the Crimson Tide had never beaten the Longhorns. That includes the great Bear Bryant, who only managed one tie in four meetings. The past five dating back to 1947 have all been bowl games.

Most famous game: There are a few to choose from, but the most memorable play would have to be Texas quarterback Robert Brewer’s quarterback draw in the 1982 Cotton Bowl. With the Longhorns trailing 10-0 in the fourth quarter, Brewer tucked and ran for a 30-yard score that turned the tide. Texas ended up winning 14-12 to finish 10-1-1.

Brief summary: Trips to Ames haven’t exactly been treacherous, but don’t tell that to Charlie Strong. Mack Brown had a little trouble with the Cyclones near the end of his tenure too, with a 28-21 loss in 2010 and a lucky escape in 2013. Tom Herman should know not to take Iowa State lightly, as he was on the Iowa State coaching staff that beat Texas for the first time.

Most famous game: Back to that lucky escape. The Longhorns maybe should have lost for the first time in Ames two years before they actually did, had the referees seen Johnathan Gray fumble the ball twice on the goal line in the closing minutes. This one is much more famous in Iowa than it is in Texas, but it certainly had the most drama of any game in this lopsided series. Paul Rhoads still has nightmares.