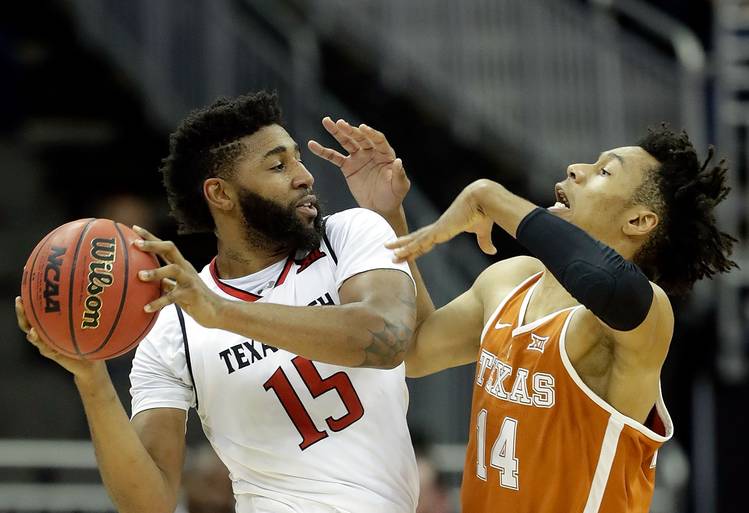 Aaron Ross #15 of the Texas Tech Red Raiders controls the ball as Mareik Isom #14 of the Texas Longhorns defends during the first round of the Big 12 Basketball Tournament at the Sprint Center on March 8, 2017 in Kansas City, Missouri. (Photo by Jamie Squire/Getty Images)

KANSAS CITY, Mo. — For 20 minutes, it was ugly. Downright embarrassing.

But somehow, No. 10 seed Texas pulled things together after halftime, put together a stunning offensive run and captured a 61-52 victory over Texas Tech in the first round of the Big 12 tournament at Sprint Center.

This was the Longhorns’ first victory in over a month. They stopped the an embarrassing seven-game losing streak and picked up their first win away from the Erwin Center this season. The Horns are now 1-14 in road and neutral games this season.

The Horns had a season-low 20 points in the first half and shot a dismal 28 percent. But Kerwin Roach Jr. helped engineer an 18-2 run that zapped the soul from the seventh-seeded Red Raiders (18-14, 6-12) after the break.

Multiple players put this one together. Roach had 13 points and went 2 for 4 from 3-point range. Andrew Jones collected 15 points, and threw down an impressive one-handed dunk in the final minute as an exclamation point. Jarrett Allen also had 10 points despite getting only five shots in the first half.

The first half was just a complete mess, statistically and otherwise. The Horns didn’t break into double digits until the game was 12 minutes old. Jones hit the Horns’ only 3-pointer of the first half, and that came in the closing seconds. Texas went 1 for 13 from beyond the arc and shot 7 of 25 overall from the floor. As bad as that sounds, it was still a six-point game at halftime.

A team that desperately needed somebody, anybody, to make a play, here came Roach. He finally powered home one of those right-down-Broadway dunks he’s been trying to slam for two years. Then, he drilled back-to-back 3-pointers that got Texas within three. He was on the receiving end of a loose ball after a wild scramble, drew an intentional foul and then hit two free throws that tied things up with 5:30 remaining.

Jacob Young’s behind-the-back pass to Mareik Isom deserves special recognition in this space. Teammates were yelling at Jones at one point because they didn’t know what he was doing. There was some lackadaisical effort chasing after some 50-50 balls, too. In the first half, it truly looked liked the Horns wanted to get this over with as fast as possible

The Horns are still alive and kicking. Next comes a matchup with West Virginia, a team that Texas usually matches up well against and has little trouble handling the press. The Mountaineers swept the regular season series. Coach Bob Huggins’ crew won by only two points in Austin on Jan. 14 but won by 15 in Morgantown on Feb. 20.