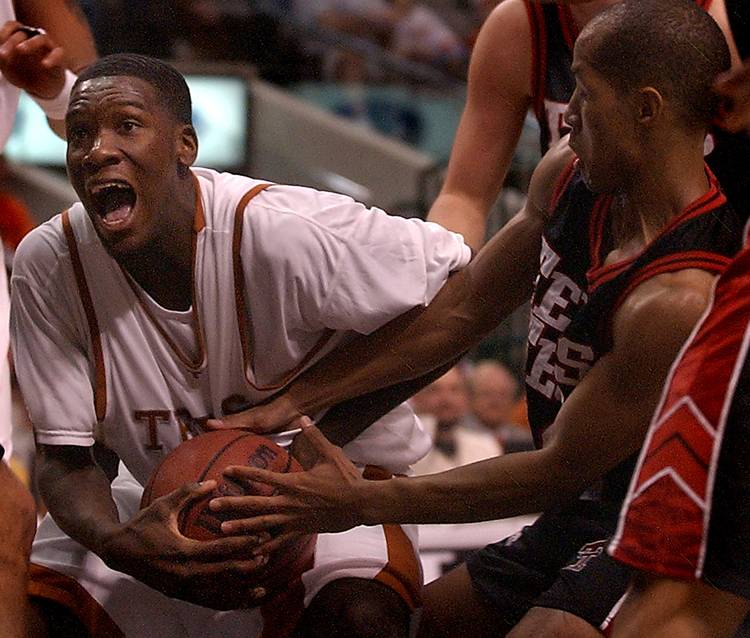 For the third time in Big 12 Tournament history, the Longhorns will play the Texas Tech Red Raiders in the Big 12 Tournament. Texas’ record is 2-1 in those games, but Tech may have the biggest win of the tournament series.

One of the big upsets in Big 12 Tournament history, the Longhorns were 13-3 entering the tournament, ranked in the top five and were weeks away from reaching the Final Four for the only time under coach Rick Barnes. Armed with All-American guard T.J.  Ford, who won the Naismith and Wooden awards but lost the conference player of the year award to Nick Collison, Texas was the No. 2 seed in the tournament.

Texas Tech finished 6-10 in the Big 12 and nearly lost to 10th-place Baylor the night before.

With the Big 12 Tournament playing in Dallas for the first time, the Red Raiders were led by Andre Emmett and Kasib Powell and took down the Longhorns. Powell was sensational in the game, making history by becoming the first player in the tournament’s history to record a triple-double with 12 points, 12 rebounds and 10 assists.

“They played as good a game offensively as anyone has played against us in a long time, ” Rick Barnes told the Statesman after the game.

It was the first time Texas was ever knocked out before the league semifinals under Barnes, and it wasn’t that close. Tech led by as many as 20 points in the game.

Both squads had success after this game. Tech lost in overtime in the next round to Oklahoma, 67-60, but would reach the NIT Final Four in New York.

And of course Texas reached the NCAA Tournament Final Four, because, as Ford said after losing to Tech:   “As long as I’m in the tournament, that gives us a chance to win the national championship.”

Tech beat Kansas State in the first round as the eighth seed in the tournament. Texas was the No. 1 seed after tying for the league title with Kansas and beating the Jayhawks head-to-head. LaMarcus Aldridge’s Longhorn squad was never really tested, building an 11-point halftime lead and keeping the Red Raiders at arm’s length for much of the second half. Daniel Gibson scored 18 points and Aldridge added 20.

Tech was led by Jarrius Jackson who scored a game-high 28 points.

Texas reached the championship game for the second time ever, losing to Kansas 80-68.

The last win of the Rick Barnes era. The best coach in Texas basketball history beat the Red Raiders 65-53. Texas led by four, 30-26, at halftime and stretched its lead out in the second. Cameron Ridley scored a game-high 14 points.

Texas Tech’s season ended, while Texas would blow a 16-point lead to Iowa State in the nest game and lose in the first round of the NCAA Tournament to Butler.