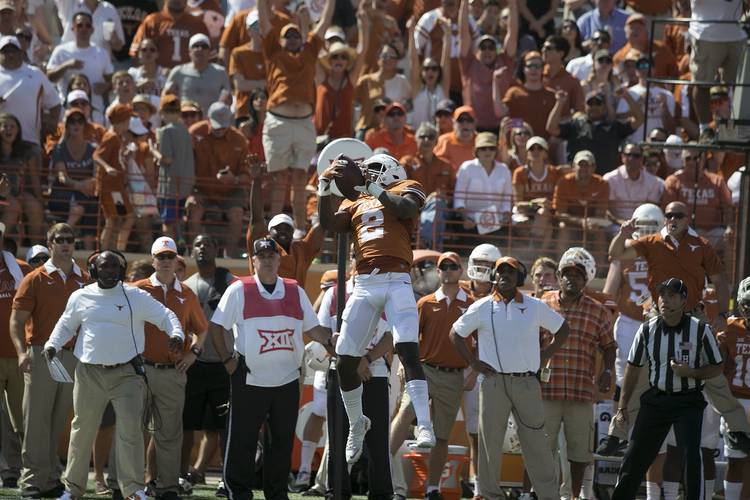 Texas's Kris Boyd catches an interception intended for Oklahoma State during the first half at Royal Memorial Stadium on Saturday, September 26, 2015. The play was called back on a penalty. DEBORAH CANNON / AMERICAN-STATESMAN

Another day, another day closer to the Texas Spring Game.

A team can be middle of the road statistically in yards-per-play, average yards allowed, the plus-minus in turnover margin could be bad — or pick whatever stat you want– and still have a solid record, a bowl game appearance and, hey, maybe even a conference championship.

Oklahoma, for instance, had the eighth worst pass defense in the Big 12, actually worse than Texas. Kansas had the best. That’s not a typo. Kansas allowed an average of 219 yards per game, while Oklahoma allowed 269.4 yards per game.

But that stat lies. Kansas was usually so far behind in games that it didn’t make any sense to pass on Kansas. The Jayhawks’ defense only defended 357 passing plays in 2016. Oklahoma defended the pass 495 times.

So, yeah, that particular stat lies. But which ones don’t? Which stat tells the truth and contributed to Texas’ up-and-down season in 2016?

Good stats: Texas was the No. 2 rushing team in the Big 12

This is going to happen when you have a running back (D’Onta Foreman) on the roster who rushes for more than 2,000 yards and wins the Doak Walker Award. Texas averaged 239.2 rushing yards per game. Only Baylor, with 241.8 yards per game, averaged more. But the Bears had 628 rushing attempts to Texas’ 597.

The Longhorns totaled 2,871 yards, so only about 800 yards came from backs not named D’Onta Foreman. Baylor had 3,143 total yards.  But while Texas was the No. 2 rushing team in the conference, it was sixth in the league in average yards per carry (4.8) and fifth in rushing touchdowns (27 total).

Bad stat: Even though the Longhorns were No. 2 in rushing, they were No. 7 in time of possession

This stat lies often. Time of possession can show a lot of things, and broadcasters love to point out how little or how much teams have had the ball during games. Only TCU, Kansas and Baylor had the ball less than Texas. Baylor and TCU had the ball less because they’re offenses are attacking spread offenses with big rewards that come with lots of three-and-outs if it doesn’t work well.

Because Texas shifted to a Baylor-like offense this year, it shouldn’t be surprising that the offense had the ball for 339:12 minutes, an average of 28:16 minutes a game.

What’s an even bigger head-scratcher is that the league’s leader in rushing, Baylor, was last in the league in time of possession. What the heck?

Balance and winning the turnover margin  is probably needed to make sure the Longhorns dominate time of possession. Kansas State was No. 1 in TOP. The Wildcats edged out Oklahoma (Bob Stoops and Bill Snyder must know what they’re doing) in the TOP game, with Kansas State averaging 32:35 minutes per game and Oklahoma 32:16 minutes per game.

Texas, however was fifth in turnover margin, horrible in third down conversions (we’ll get there) and penalties (we’ll get there also). Also not helping Texas in TOP is that while the Longhorns were second in rushing in the Big 12, they were fifth in average yards per carry, which means (anyone who watched the Longhorns play will start nodding now) they had a lot of negative run plays mixed with lots of chunk plays.

That and Texas was also tied for last-place in sacks allowed with 32. Sacks are drive killers, which leads us to the next stat…

Texas was second in the Big 12 in sacks, getting to the quarterback 41 times, that’s two sacks behind TCU. Breckyn Hager, who will be back in 2017, had 13.5 tackles for loss, which was third in the league. He also had six sacks, Malik Jefferson had five and Naashon Hughes three. This means that the sack numbers were spread out pretty well. Texas also had 15 quarterback hurries and 91 tackles for a loss.

Despite getting after the quarterback, Texas still managed just the seventh-best pass-defense in the league, averaging 258. yards in the air.

It’s hard to win when a team converts less than 40 percent of their third downs. Texas was at 36.1 percent. The only team worse than that was Kansas, which won two games (and yes, internet, we know Texas lost to Kansas in football). Kansas converted 33 percent.

Only converting on third down 70 times in a season is never good, especially considering Kansas State and Oklahoma (the standard teams for consistency in the Big 12 right now) converted 51. 5 and 45.4 of their third down conversions.

So do the math: When you average 4.8 yards per carry, and you’re seventh in passing completion in the Big 12 (60 percent), sometimes you’re going to face a lot of third-and-longs, and those aren’t easy to convert.

Texas wasn’t first in any statistically category that didn’t involve punting among Big 12 teams. They also weren’t last in many either (last in PAT kicking, but we all knew that, right?).

But when you’re ninth in the Big 12 in penalty yards, it’s embarrassing.

Texas was flagged 85 times last season. Which is actually less than Kansas State (88), Texas Tech (94) , TCU (88) and the same as West Virginia. But those 85 penalties accounted for 769 yards. And all those teams that had more penalties played in one more game than the Longhorns, who didn’t go bowling this winter.

Texas averaged 64.1 yards of penalties a game. Compare that with Oklahoma State, which was flagged just 69 times last season for 643 yards, and average of 49.5 yards a game. That’s a difference between about 15 yards a game compared to Texas, essentially a first down and more. Texas was sixth in the Big 12 in first-down conversions, seven less than the No. 5 team, which was Oklahoma State.

It’s tough to win when there’s that much laundry on the field.

Remember when I said stats can lie? Baylor won seven games this past season. Sure, they went 3-6 in Big 12 play, but they also won seven games. It’s amazing that happened, because Baylor had 1,068 penalty yards this season on a whopping 129 flags. Yes, they played 13 games. That’s still 10 penalties a game. Texas had a little more than seven per game.