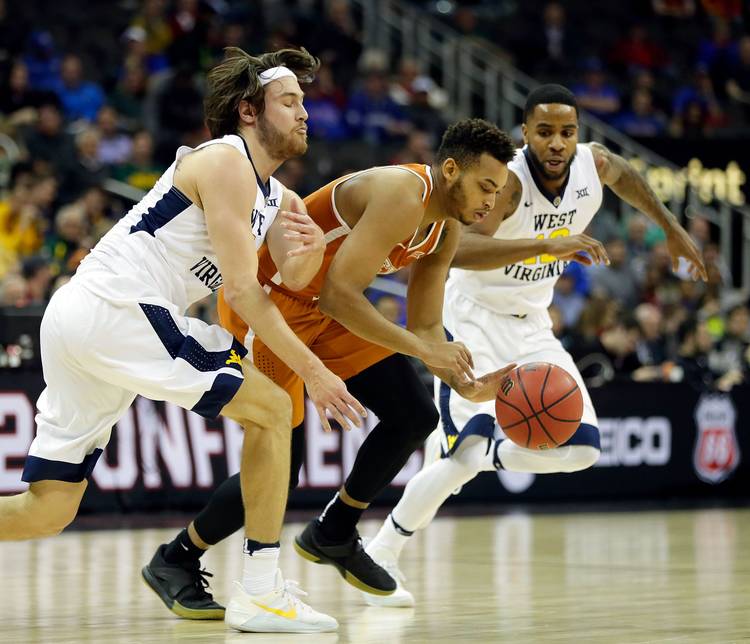 Eric Davis Jr. #10 of the Texas Longhorns controls the ball as Nathan Adrian #11 and Tarik Phillip #12 of the West Virginia Mountaineers defend during the quarterfinal game of the Big 12 Basketball Tournament at the Sprint Center on March 9, 2017 in Kansas City, Missouri. (Photo by Jamie Squire/Getty Images)

KANSAS CITY, Mo. — Pesky TCU took down top-ranked Kansas on Thursday. Could Texas, the last-place team in the Big 12, knock out 10th-ranked West Virginia, too?

Well, the Longhorns sure tried inside a half-empty Sprint Center.

Playing hard for the second straight night, Texas simply didn’t make enough plays and gave up too many 3-pointers before accepting a 63-53 loss in the Big 12 quarterfinals.

The Longhorns’ season, one that has frustrated just about everyone associated with the UT program, has come to a merciful end. Texas finished the year with an 11-22 record, tying the mark for the most losses in school history originally set 34 years ago. The 1982-83 squad finished the year 6-22.

The program’s future will be dissected for weeks to come. It may be a while before fans learn whether freshman Jarrett Allen returns to jumps into the NBA draft. But on this final night, Andrew Jones scored 13 points and went 3 for 5 from beyond the arc. Allen and senior Kendal Yancy also both scored nine. That was no match for Jevon Carter, who poured in 21 points as the Mountaineers hit seven 3-pointers.

Roach appeared to fade in February, almost as if the pressure of being UT’s chief ball handler was too much. But he rose to the occasion at the Big 12 tournament. He played terrific in the second half against Texas Tech and held his own against the so-called “Press Virginia” defense. Roach won’t be asked to play point guard next season; incoming freshman Matt Coleman will take the reins. Don’t say Roach didn’t give it his all. At one point, he vomited on the court and then hit a jumper, prompting UT radio broadcaster Craig Way to call it the “puke-and-pop.”

You simply cannot win without scoring, right? Well, Texas tried to prove that theory wrong. The Longhorns were shooting 52 percent at one point in the first half but finished the period without a field goal in the final 7 minutes, 5 seconds. Meanwhile, WVU was 6 for 9 from 3-point range in the first half. Texas hung in there with free throws, but WVU finished the half on a 12-2 run to grab a nine-point lead.

Just like in the first-round win over Texas Tech, UT started slow and dug itself a hole. The Horns were down by 10 points just six minutes in. But Jarrett Allen threw down a monster dunk, and then went to the other end and blocked Nathan Adrian’s shot. That got the Horns going. Jones hit a 3-pointer, and Eric Davis Jr. followed with another. Soon, James Banks’ dunk tied things up at 27-27.

The real dagger may have come with 6:34 remaining. Elijah Macon scored on a bank shot. Then, the Horns turned it over on the inbound play, and Carter swished a 3-pointer, giving WVU an 11-point lead.

The offseason begins the minute the team plane lands back in Austin. UT coaches usually give their players a week off. It just so happens that next week is spring break. The Horns can continue practicing up until the tipoff of the NCAA national championship game. Then, summer workout rules go into effect. Expect a long offseason of soul searching inside Cooley Pavilion after the worst season, from a win-loss perspective anyway, in more than three decades.