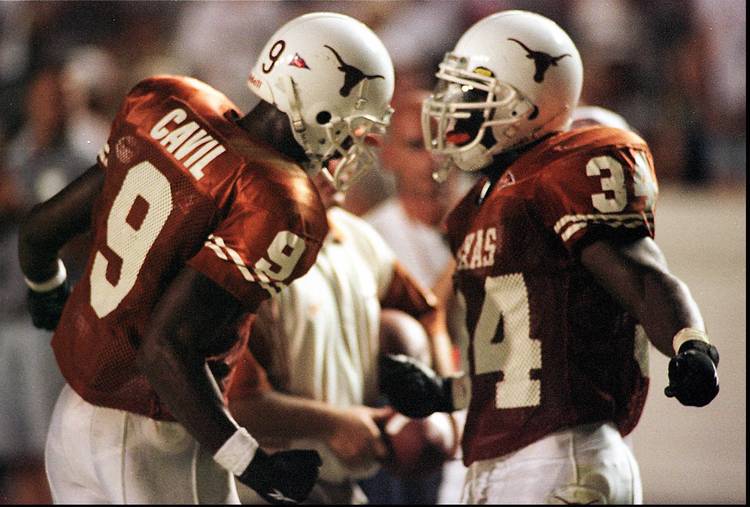 UT #9 Kwame Cavil and Ricky Williams do a little celebration dance as they celebrate Ricky's touchdown in the second half against Iowa State.

In 36 days, Texas football fans will get their first glimpse of Tom Herman’s Longhorn football team on April 15. In honor of spring football, we’re counting down the days till the spring game with 50 facts for 50 days.

Has that bald spot grown back yet?

For all the times Texas fans wanted to pull their hair out during a frustrating 2016 season, perhaps no decision was more puzzling than Sterling Gilbert’s refusal to give the ball to D’Onta Foreman in closing time at Texas Tech.

Why bring this up now? Well, it’s a prime example of how fickle records can be. Because the Longhorns opted for the 18-Wheeler package instead of their freight train running back, Foreman finished two yards shy of the greatest rushing performance ever by a UT junior.

Who knows, he may even have eclipsed Ricky Williams for the most yards ever.

Here’s a list of the top rushing games by Longhorns at each level of eligibility:

Somehow, no sophomore has matched Gilbert’s performance against the Bears from 51 years ago despite 14 players rushing for more yards since.