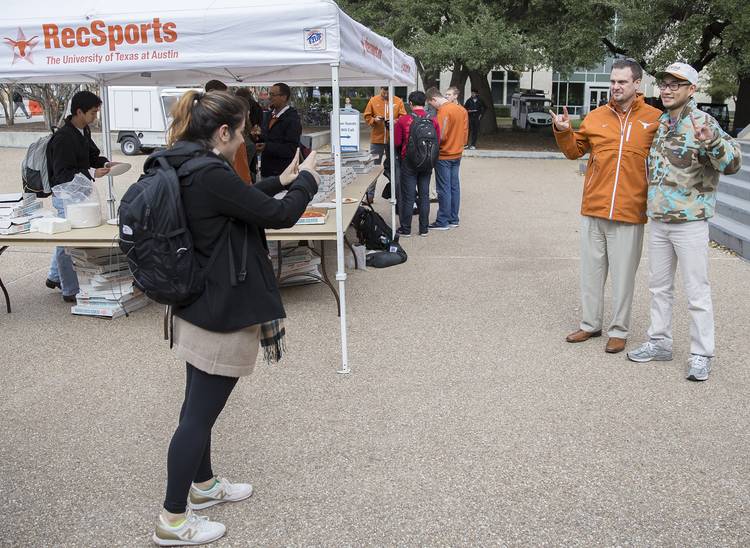 Texas Head Football coach gathered outside of Gregory Gym to give away free pizza and meet students as they get ready and prepare for finals on Friday, Dec. 9, 2016. Thi Cao a senor at the University of Texas poses with the New Head Coach Tom Herman before grabbing a slice of Gattis pizza on Friday. RICARDO B. BRAZZIELL/AMERICAN-STATESMAN

Have you ever wanted to test your football skills against some of Texas football’s greatest players?

Some lucky students will get that opportunity March 25 as part of the Longhorns’ first “Student Appreciation Practice” under coach Tom Herman. On Friday, Herman announced some of the details about the practice, which he and other coaches and players have been tweeting about for the past week.

“You create the home-field advantage in Austin, and the purpose of this day is to say thank you,” Herman said. “We want you to take ownership in the program, and we want you to know that you always have access to your team.”

Students will have a chance to compete against Longhorn legends Michael Huff, Aaron Ross and current NFL player Marquise Goodwin, Herman said. They will also be granted access to field level during a Texas scrimmage and be able to interact with current players and coaches afterward.

The practice begins 12:30 p.m. that Saturday at Royal-Memorial Stadium.