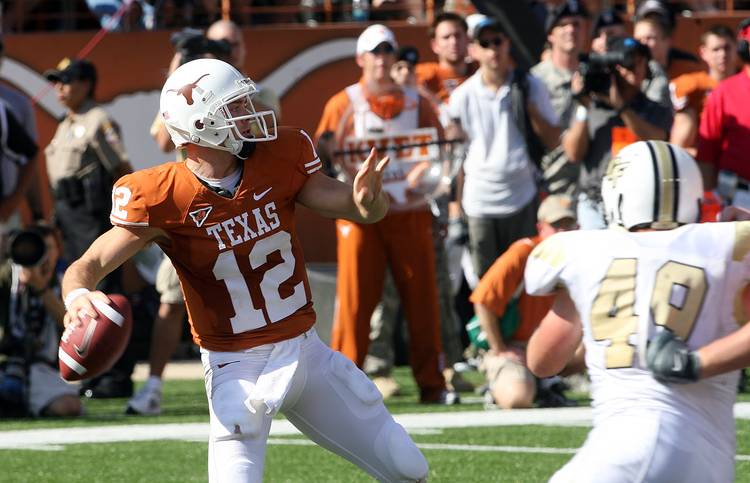 In 35 days, Texas football fans will get their first glimpse of Tom Herman’s Longhorn football team on April 15. In honor of spring football, we’re counting down the days till the spring game with 50 facts for 50 days.

For a school with a coach known for saying “I’ve always felt that three things can happen to you whenever you throw the football, and two of them are bad” Texas has had some passers who avoided the two “bad” things a lot.

Today is all about the passing. And here are some Texas passing streaks to know:

Three times Colt McCoy had consecutive 300-yard passing games in his career, surpassing James Brown, who had two. McCoy had back-to-back 300-yard games against Missouri and Oklahoma State in 2008, then Texas A&M and Ohio State in 2008 and his final streak came in 2009 with games against Kansas and Texas A&M.

Brown did his games against Pittsburgh and Notre Dame in 1995 and Texas A&M and Nebraska to end the 1996 season. Tyrone Swoopes, David Ash and Major Applewhite all had consecutive 300-yard passing games once.

A passing record McCoy doesn’t hold! Applewhite had 11-straight 200-yard passing games in 1999… and yet the Chris Simms… we’ll stop.

Oklahoma State didn’t have an answer for McCoy in 2008. He completed 18 consecutive passes against the Cowboys that day. He broke a record that he set a week earlier against Missouri when he completed 17 passes.

Twice a quarterback has completed 17 passes in a game for Texas, and they are related. Case McCoy tied his brother’s second-all-time mark with 17 straight completions against Kansas State in December of 2012. David Ash, Colt McCoy and Vince Young all had games with 15 straight completions, tied for fourth.

Consecutive passes without an interception

For crying out loud, why did Mack Brown bench Major … OK. We’ll stop.

Consecutive games with a touchdown pass