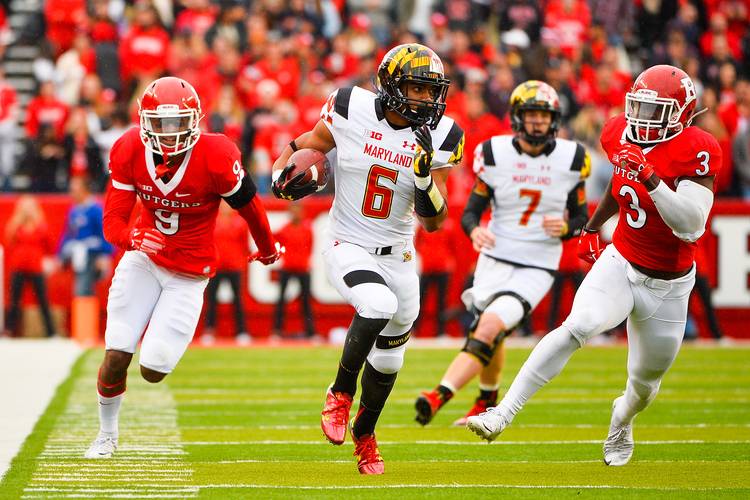 PISCATAWAY, NJ - NOVEMBER 28: Ty Johnson #6 of the Maryland Terrapins runs past Steve Longa #3 and Saquan Hampton #9 of the Rutgers Scarlet Knights before scoring a touchdown during a game at High Point Solutions Stadium on November 28, 2015 in Piscataway, New Jersey. (Photo by Alex Goodlett/Getty Images)

In 33 days, Texas football fans will get their first glimpse of Tom Herman’s Longhorn football team on April 15. In honor of spring football, we’re counting down the days till the spring game with 50 facts for 50 days.

The spring game is inching closer, but the real thing will be here sooner than you think.

It’s never too early to start scouting for the season opener, which takes place Sept. 2 at Royal-Memorial Stadium. The opponent that day, for just the fourth time ever, is Maryland.

We’ll get to the 2016 stats, but here’s one about this series that is nothing short of incredible: In the previous three meetings, the Longhorns have outscored the Terrapins 102-0. Is another shutout in the offing?

Maryland started the 2016 season with four-straight victories, including wins in all three regular season non-conference games. Blowouts over Howard, Florida International and Purdue, and needing double overtime to get past Central Florida isn’t exactly lighting the world on fire, but wins are wins — right Texas fans?

The Terps had (and quite possibly still have) a quarterback problem. Six different players threw passes, including four who attempted at least 30. Persistent shoulder injuries limited starter Perry Hills throughout the latter half of the season. He missed two games altogether and had to leave four others. That allowed rising sophomores Tyrell Pigrome and Max Bortenschlager to gain valuable experience, but neither are considered the leader in what is a crowded quarterback room. North Carolina transfer Caleb Henderson appears to be the leader in spring camp, which gives him a leg up over highly-touted prospect Kasim Hill.

Expect to see multiple Terps line up behind center on Sept. 2.

Watch out! Maryland ranked second-to-last in the FBS (thanks, San Jose State) in sacks allowed, which is a terrible problem to have when your quarterback has a fragile shoulder. New offensive line coach Todd Bowen has been tasked with fixing the problem, but he’ll face a stiff test Week 1 with the likes of Breckyn Hager and Malcolm Roach rushing the passer.

Despite all that, Maryland wasn’t completely inept offensively last year. The Terps averaged 199.5 yards on the ground, which was fourth in the Big Ten behind Ohio State, Michigan and Wisconsin. Running back Ty Johnson surpassed 1,000 yards and gaines 9.1 yards per carry.

If you’re looking for return on investment, the season opener should provide plenty of offensive fireworks. As many as last year? We’ll have to wait and see, but the Terps did have one of the worst defenses in the Big Ten in 2016, allowing 427.1 yards per game.