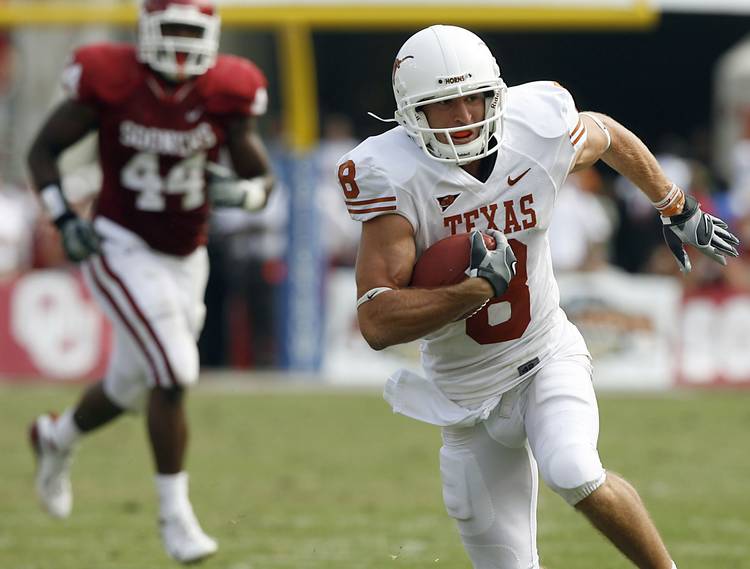 In 33 days, Texas football fans will get their first glimpse of Tom Herman’s Longhorn football team on April 15. In honor of spring football, we’re counting down the days till the spring game with 50 facts for 50 days.

Texas wide receivers combined for only three 100-yard games in 2016, and none had more than one.

Leave it to Jordan Shipley and Wane McGarity to put that in perspective. In 2009 and 1998, respectively, the Longhorn receiving greats had seven performances of at least 100 yards. Seven. In one year.

Here’s a breakdown of those historic campaigns. Armanti Foreman and Devin Duvernay should take notice.

The greatest receiving season in Texas history began with a bang. In the 2009 season opener against against Louisiana-Monroe, Shipley caught eight passes for 180 yards and 78-yard touchdown. All but 16 of his yards came in the first half. He was just getting warmed up.

On his way to Texas records of 116 catches, 1,485 receiving yards and 13 receiving touchdowns, Shipley reached the century mark six more times. Against Central Florida on Nov. 7, he set another Longhorns receiving record with 273 yards on 11 catches. Other 100-yard games came against UTEP (122), Colorado (147), Missouri (108), Kansas (108) and in the BCS National Championship Game against Alabama (122).

Of course, one can’t talk about Shipley without mentioning Colt McCoy. By 2009, the senior duo probably could have combined for 100 yards with the stadium lights out.

If the long ball is more your style, then McGarity was your guy. Astoundingly, he reached seven 100-yard games in one season with only 58 total catches. If you’re paying attention, that’s exactly half as many as Shipley had in 2009.

How did McGarity do it? A yards per catch average of 18.7 is a pretty good place to start. Every Longhorns fan of a certain age will remember the the show he and Major Applewhite put on at Texas Tech, combining for four touchdowns in a loss. McGarity’s 174 yards that day were a career high, and they came on six catches.

50 in 50: Who did it better? Jordan Shipley or Wane McGarity? https://t.co/lLnAQVSIJz