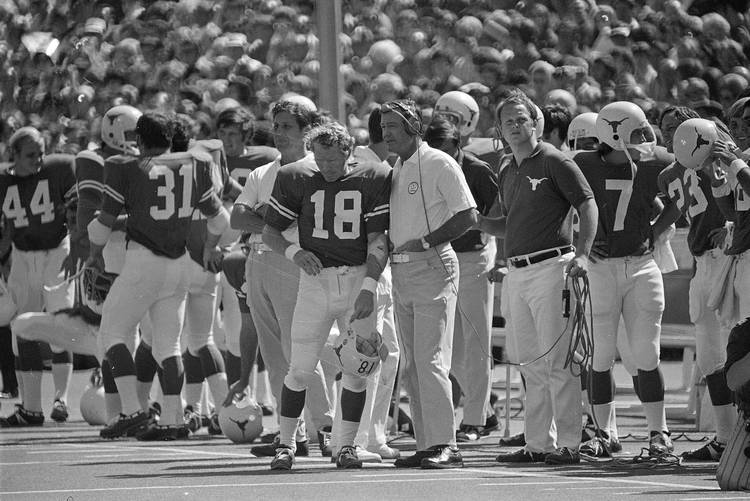 Coach Darrell Royal of Texas talks with his quarterback Donnie Wigginton on the sidelines during the Texas-Oklahoma game in Dallas, Oct. 9, 1971, as the Longhorns were being defeated by the Sooners. A short time later Wigginton was injured and had to leave the game. Oklahoma defeated Texas 48-27. (AP Photo)

We’re now deep into Texas Spring Football and the spring game is now nearly a month away.

If Tom Herman and his offensive staff have their way, Texas’ offense will be highly productive, putting up points, moving the chains and bringing some fun back to the 40 Acres. But if things don’t work out, they could end up on this list.

Here are some offensive numbers to know, because if you forget them, you could be doomed to repeat them:

Fewest points scored in a season

From 1893 to 1938, Texas football broke and set this record over and over again. Now, how bad were these numbers in their era is another post altogether.

The worst scoring offense in Texas history is 1938 when the Longhorns scored just 52 points in nine games. Now, Texas scored 50 points in one game last season, and the single-game record is 92 in the early 1900s against Daniel Baker College.

But yes, the ultimate low scoring output for the season is 52 points, which is eight fewer points from the previous season, which is No. 2 on the list. Flexing out the number of games played to 10, the lowest output is 1902, when Texas scored 87. Obviously the 1938 team is also the record-holder for lowest scoring average with 5.8 points per game.

Fewest plays in a season

The offense in 1938 was really bad. They had just 412 plays, the lowest in Texas history.

Fewest yards in a season

Fewest yards per play in a season

Fewest passing yards in a season

Fewest passing touchdowns in a season

Fewest rushing touchdowns in a season

Fewest first downs in a season