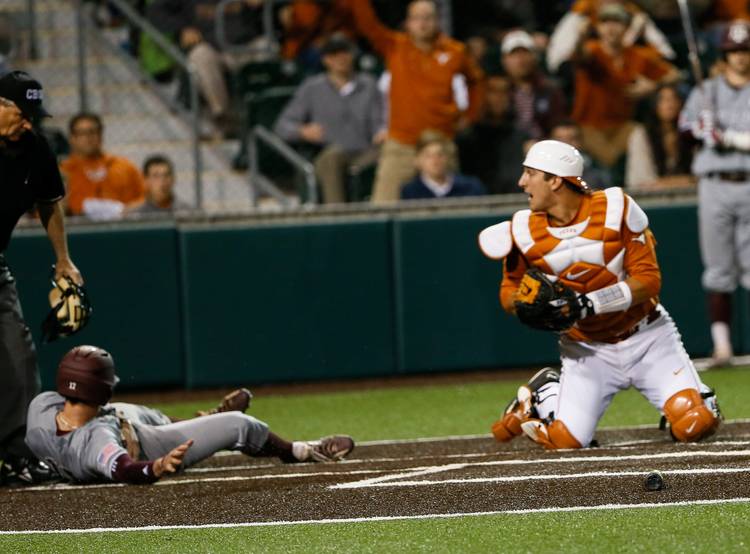 Catcher Michael McCann (#40) makes tag at the plate in a game of the Texas A&M University versus the University of Texas at UFCU Disch-Falk Field in Austin, Texas on March 14, 2017 (Andy Nietupski for AMERICAN STATESMAN)

The announced crowd of 6,895 fans who showed up to watch the baseball clash between Texas and Texas A&M was treated to a bit of nostalgia Tuesday night.

Not only did Longhorns legend Colt McCoy throw out the first pitch, but he threw it to an old teammate: Quan Cosby. The pair connected for more than 2,000 yards during their time on the 40 Acres, so there wasn’t a chance they were letting this one drop.

First pitch from Colt McCoy caught by Quan Cosby. It sure is the Lone Star Showdown on LHN.

(You never get used to Smokey.) pic.twitter.com/AATPfDN5Aa

It was also a pretty great time to live in the present at UFCU Disch-Falk Field, as the Longhorns completed an exciting 4-3 victory which included some dramatics in the later innings.

With the Aggies trying to mount a rally in the eighth inning, Texas first baseman Kacy Clemens charged an Aggies bunt and threw it to catcher Michael Cantu for the second out — allowing reliever Beau Ridgeway to escape the inning with a 4-3 lead.

Just over here watching @KClemens21‘s game-changing play at the plate in the 8th from last night’s 4-3 win over Texas A&M. #HookEm 🤘 pic.twitter.com/FyyL6Ay2tG

Watch the full highlights from the game below.

50 in 50: When Texas football’s offense sputtered

Karen Aston a finalist for national Coach of the Year honors