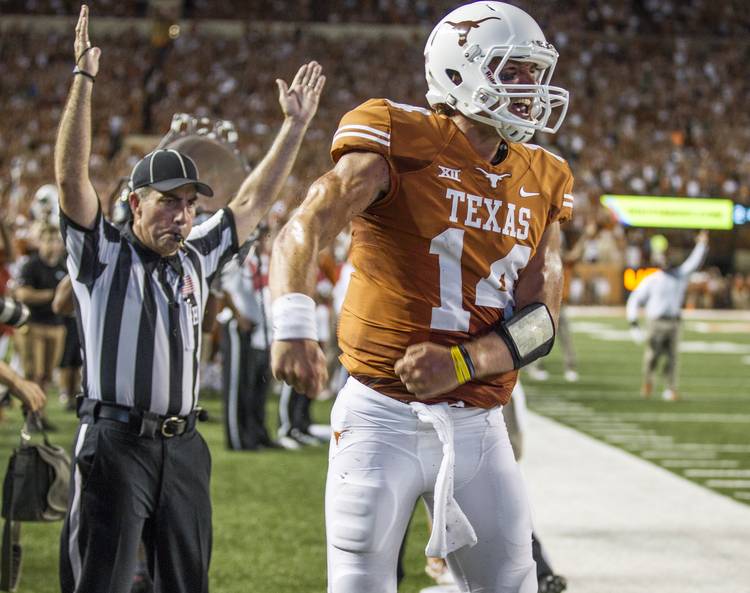 In a stunning change of direction, Texas officials announced Thursday that former quarterback David Ash has been medically cleared to play football again and will participate in UT’s pro timing day on March 28.

No other information was distributed by UT, and a team spokesman said Ash would address reporters at the upcoming workout for NFL scouts.

Ash retired from football in September 2014 after suffering from a series of concussions. His last appearance as a Longhorn came in the 2014 season opener against North Texas.

Ash played the entire game but did not attend the post-game news conference. Later that night, he called trainers and said he felt nauseous and dizzy. The UT training staff refused to grant him clearance to play again, and on Sept. 17, 2014, Ash announced his retirement.

Ash posted a 15-7 record as a UT starter with 4,728 passing yards, the eighth-highest total in school history.

“What I told him, that’s been our concern the whole time,” former coach Charlie Strong said at the time. “There was no way we were going to let you back out on the field. We were going to be concerned about your health.”

Ash later told the American-Statesman, “I think I’ve met my quota for tears for the next 10 years. At the core of my heart of hearts, I knew I shouldn’t be playing.”

Now, Ash may feel rejuvenated. Or, he sees former UT legend Vince Young getting another shot in the Canadian Football League and figures why not?

The devout Christian, who openly quotes Scripture, tried to make it with the UT baseball team. Then-coach Augie Garrido allowed Ash to throw some bullpen sessions with pitching coach Skip Johnson. Nothing serious ever panned out.

At the time, UT quarterbacks coach Shawn Watson said, “He had mentioned he was really getting bored. He’s missing athletics.”

It’s unclear what chance, if any, Ash has at landing a pro football contract. Any team would take a long, hard look at his medical history before clearing him to play. But by working out at pro day, Ash is signaling that he at least wants to try.

“It’s been hard,” Ash said in an emotional press conference on Sept. 22, 2014. “I’m at peace with that. God has given me a peace. And I have a lot of hope and a lot of belief that there’s still awesome days ahead for me.”