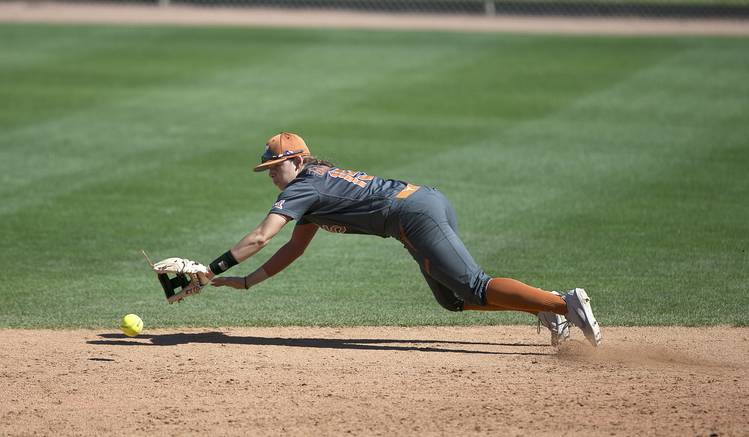 Texas's Jade Gortarez reaches out for a ball against Indiana's on Saturday, February 17, 2017. DEBORAH CANNON / AMERICAN-STATESMAN

LONG BEACH, Calif. — Texas exploded for 10 runs in the sixth inning and Brooke Bolinger allowed four hits and one run in a 10-1 softball win Wednesday night at Long Beach State.

Sixteen Longhorns batted in the sixth inning, the biggest single inning for Texas since a 10-run third inning in a five-inning, 15-2 win at Iowa State in May 2016. Wednesday’s win at the LBSU Softball Complex was a six-inning win.

Eight Longhorns combined for Texas’ 10 hits, led by two-hit games from a pair of freshmen — catcher Taylor Ellsworth (2-for-3 with a double, run and and RBI) and second baseman Jade Gortarez (2-for-4 with a run and an RBI). Shortstop Devon Tunning was 1-for-3 with two RBIs, and second baseman Kaitlyn Slack (1-for-3, run), first baseman Kelli Hanzel (1-for-3, run), designated player Mickenzi Kprec (1-for-3, run) and center fielder Reagan Hathaway (three walks, two runs) each had single RBIs.

Bolinger (4-1) picked up the pitching victory; she allowed four hits and one earned run, struck out two and walked five in five innings. Senior left-hander Tiarra Davis struck out one in a perfect sixth inning in relief of Bolinger.

Texas (14-10), which has won three out of its last four games, opens a three-game series at Cal State Fullerton on Friday night.

Karen Aston a finalist for national Coach of the Year honors