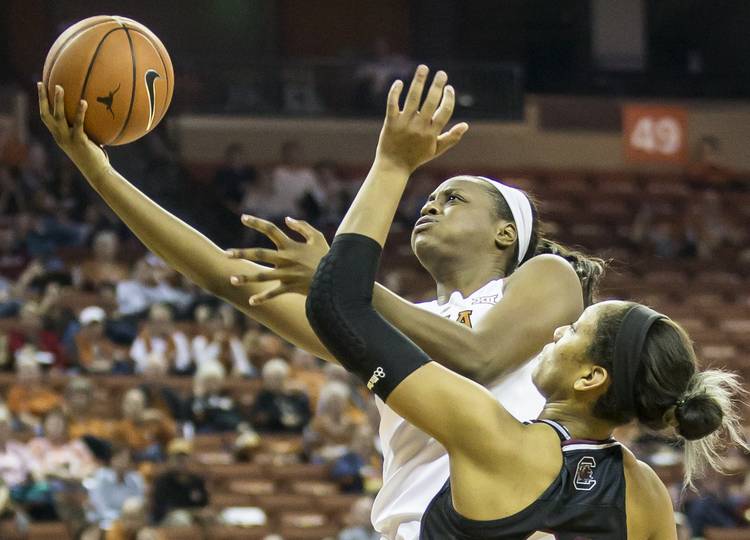 Texas Longhorns Joyner Holmes will be a key factor in the frontcourt for Texas vs. Sugar Bears. Frank Erwin Center, Austin, Texas. RICARDO B. BRAZZIELL/AMERICAN-STATESMAN

Central Arkansas coach Sandra Rushing boasted about her team’s mascot on the eve of the NCAA Women’s Basketball Tournament game against Texas.

“We’ve got the best mascot in the country,” Rushing said. “Someone asked where it came from. I said it’s because we’re sweet.”

Sweet, perhaps, but also short. The Sugar Bears rely on their tallest players, 6-1 posts Kierra Jordan and Raquel Logan. Jordan, who comes off the bench, ranks second in the team in scoring (13.7 ppg) and leads the team in rebounding (6.8). Logan, meanwhile, has blocked 46 shots through 30 games.

“I’m sure Texas will be stronger, maybe a little quicker,” senior guard Brianna Mullins said Thursday. “But regardless of that, I feel like my teammates and I have the heart to come and just play basketball.”

“People might not remember they were ahead of Louisville after the first quarter last year (in a first-round NCAA tournament game),” she said.

Lang said the Longhorns need to take advantage of the height advantage.

“We’ve been talking about how we need to throw the ball inside and we need to expect double-teams,” Lang said. “We need to kick the ball back to our guards.”

Game time is 1:30 p.m. Friday at the Erwin Center. The winner will take on the winner of North Carolina State-Auburn, which tips off at 11 a.m.