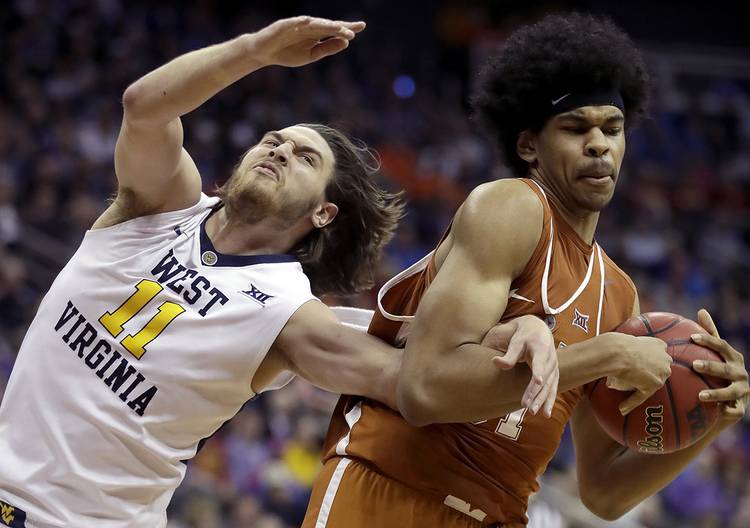 West Virginia's Nathan Adrian (11) and Texas' Jarrett Allen battle for the ball during the second half of an NCAA college basketball game in the quarterfinal round of the Big 12 tournament in Kansas City, Mo., Thursday, March 9, 2017. (AP Photo/Charlie Riedel)

It’s been one week since our last “what is Jarrett Allen’s draft stock” article.

It’s well established that the talented, 6-foot-11-inch center who was the best player on the court for Texas at the end of his freshman season is getting mixed reviews from NBA talent evaluators  and draft gurus. (If they thought deciding his NBA stock was hard, try following his recruiting for a year).

That said, another worthy NBA mock draft was released just before the start of the NCAA Tournament last week by Sports Illustrated, and Allen has dropped out of the first round. Allen had been the outlet’s No. 23 pick on the big board in its previous mock, but now finds himself with other enigmas like Indiana’s Thomas Bryant and North Carolina’s Tony Bradley.

Some of the players Sports Illustrated does list would seem inferior to Allen if you just looked at the college numbers. Duke back-up center and former No. 1 prospect Harry Giles had about as disappointing of a season you can have after being a top recruit. Coming off back-to-back ACL injuries and missing huge chunks of the season, then being a rather non-factor for the Blue Devils this season, Giles is still listed at No. 13 Sports Illustrated’s on the big board, as well as most other mock drafts.

Allen averaged more points, rebounds and minutes than Giles, and both are 6-foot-11-inches tall.

The difference, though, is Giles’ potential is as high as any player in the draft, something Sports Illustrated points out:

“… Giles has begun to show flashes of the player he was pre-injury. He rebounded well and stayed active in limited minutes at the ACC tournament, also blocking four shots against North Carolina. Although his performance alone this season doesn’t inspire a ton of confidence, if his knees check out, it’s easy to see a team gambling on his potential.”

Allen is off the two-round deep mock draft at Draft Express as well as SB Nation, which released a mock draft on Monday. The site that had been firmly on the “Jarrett Allen is lottery pick” corner all season, www.nbadraft.net, no longer has Allen in its two-round draft.

The local product has some time to decide whether he wants to enter the NBA Draft. The deadline to declare for the NBA Draft is April 23. Then players have until May 24 to withdraw from the draft.

Of course, Allen isn’t obligated to announce whether he’s returning or going publicly, though the longer Allen leaves Texas in the wind on his decision, the harder it’ll be for the coaching staff to recruit any late players to Austin, if that happens at all.

Inside the Lexington Regional for Texas women’s basketball