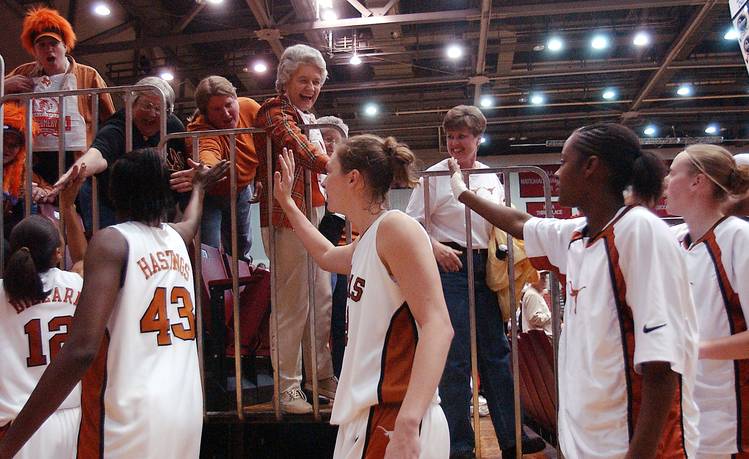 Deborah Cannon/American-Statesman Texas fans congratulate the team as they walk to the locker room after beating Arkansas in the second round of the NCAA 2003 Division I Women's Basketball Championship in Cincinnati, Ohio, on Tuesday, March 25, 2003. The Longhorns advance to the Sweet 16.

The Texas women’s team is dancing to Lexington, Ky., a state that’s home to bluegrass (both the grass and the music), smoked mutton, bourbon and basketball fans that are both the worst and best in the world. Few states love basketball more than the state of Kentucky, where education pays, so to say the Texas women will be going to place where college basketball is well-liked is an understatement.

A few things you need to know if you’re heading to Lexington.

First: Flying directly to Lexington will set you back about a $1,000, so pay half that, fly into Cincinnati’s airport, which is actually in Covington, Ky. and about an hour away from Lexington.

I can’t help you beyond the airport tip with the first one, but I can the second one. Here’s 16 things you need to know about Texas women’s basketball in the Sweet 16

16. The last time it happened

Texas reached the Sweet 16 last season and has now gone to the round of 16 three straight seasons. The last time that happened, Jody Conradt was the coach, Barack Obama wasn’t even a U.S. senator and Donald Trump’s show “The Apprentice” was just starting. Texas made the Sweet 16 in 2002, 2003 and 2004. Sandwiched between two Sweet 16 appearances was a Final Four appearance.

Karen Aston and Jody Conradt are the only coaches in Texas history to lead the Longhorns to the Sweet 16. Rod Page, the first coach, and Gail Goestenkors, the third coach, never got out of the first weekend of the tournament.

Western Kentucky University is about two and half hours away from Lexington and is in Bowling Green, Ky. In 1985, Texas reached the Sweet 16 and lost a heart-breaker 92-90 in Bowling Green. Texas is 2-1 all-time in tournament games played in Kentucky.

9. The most recent all-region team members

Ariel Atkins and LaShann Higgs were all-region last season. Higgs, then a freshman, had three steals in the Sweet 16, while Atkins scored 16 points and eight rebounds. Imani Boyette was the leading scorer with 18 points and 10 rebounds.

Avert your eyes! In 2015 eventual National Champion and current women’s basketball owner, Connecticut beat Texas 105-54. It is the largest margin of defeat in Texas tournament history. Texas kept it closer the next year when they played the Huskies in the Elite Eight, but still lost 86-65.

If Texas plays Stanford in the Sweet 16, they’ll be the lower seed. Texas  has one win over a higher-seeded team in the Sweet 16. Texas beat Hall of Famer Kay Yow and North Carolina State in 1990. The Wolfpack were the No. 2 seed and Texas the No. 3. Overall, Texas is 2-16 as the lower seed in the NCAA Tournament.

Texas first reached the Sweet 16 in 1983 under Conradt. It was a big time win. Texas beat Kansas State in overtime (one of two Texas OT tournament games) 73-70 in Ruston, La.

Texas plays the winner of tonight’s Stanford-Kansas State game. The Longhorns beat Stanford in 1988 in the Sweet 16. See above about Kansas State.

Texas is 9-4 in the Sweet 16, beating UCLA last year to snap a two-game losing streak in the round.

1. This is where Texas won it all

Once there, Texas bashed Western Kentucky, see No. 14 for more information, then beat University of Southern California (who had one of the greatest women’s basketball players ever in Cheryl Miller on the roster) to win the championship.

It is the only basketball championship a Texas team, men’s or women’s, has won.

They don’t call them the Red Raiders for nothing: What does Texas vs. Tech have to do with the Russia hearings?