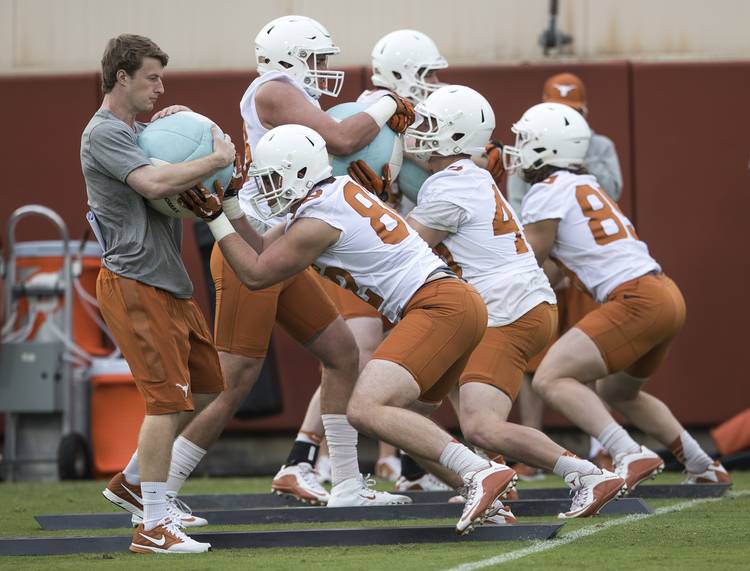 Texas held the third of its spring football practices on Tuesday, and the media was granted access to 15 minutes of drills. Here are three observations:

1. A Michael Dickson sighting. Sidelined throughout the spring with a hamstring injury, punter Michael Dickson was dressed out for part of Texas’ first practice in pads. He did not punt in front of the media, though. Rather, he was seen conditioning during that 15-minute window.

A rising junior, Dickson was a Ray Guy finalist during the 2016 season. He averaged a school-record 47.4 yards per punt last season.

2. A move for Bonney. Before Texas departed for its spring break, head coach Tom Herman confirmed that junior-to-be John Bonney had been working out with the safeties. Bonney started seven games at cornerback in 2016, but Herman believes his physicality could be used at a different position. On Tuesday, Bonney was once again practicing with the safeties.

Watching Bonney and his fellow safeties? NFL safety Michael Griffin, an Austin native and Texas ex who has played in 154 games for the Tennessee Titans and Carolina Panthers since 2007.

3. Highlight-reel grabs. With media members and high school coaches in the audience, wide receiver Collin Johnson made two nice catches. During one drill, he hauled in an over-the-shoulder pass from quarterback Shane Buechele. During another session, he snagged an impressive reception while assistant coach Drew Mehringer served as a faux cornerback.

The 6-6, 215-pound Johnson had 28 receptions and 315 yards his freshman year. Two of his three touchdowns were recorded in acrobatic fashion during a 45-37 win over Texas Tech.