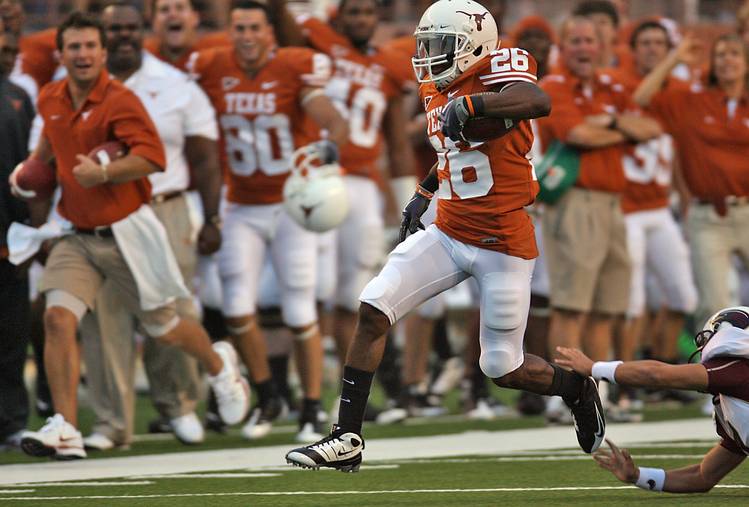 05 SEPTEMBER 2009- AMERICAN-STATESMAN/RODOLFO GONZALEZ- University of Texas' #26, D.J. Monroe, leaps past the diving hands of University of Louisiana Monroe kicker #7, no name on roster, on his way to a touchdown kickoff return during first half action held at Darrell K Royal -Texas Memorial Stadium in Austin, Texas, on Saturday, September 5, 2009.

And we’re returning this post to the house with the best returners, statistically, in Texas football history.

Texas has returned 28 punts for touchdowns, and they’ve never done it better than the first time. Bo Hilliard’s 95-yard return in 1932 is the first Texas punt returner to take it to the house for a touchdown and the longest. Jim Moore in 1973 fell one yard shy of breaking the record with a 94-yard return. Daje Johnson twice hit 85 yards on a touchdown return, while Aaron Ross once had an 88-yard return.

The most punt returns returned for touchdowns

Here’s one from Ross:

Here’s one from Shipley:

Vasher recorded 1,314 yards from 2000-2003, returning two punts for scores and surpassing Eric Metcalf for most in Texas history. Metcalf is considered one of the greatest kick returners in the history of football, so this is no small feat. Metcalf is still second on the list with 1,076 yards.

Most punt return yards in a season

The tale of Bobby Dillon

Dillon is the original university president of “DBU” and like Ross, Vasher and other defensive backs, he also was a terrific punt returner. From 1949 to 1951, Dillon has the highest punt return average in school history with 17.2 yards per return for his career. He returned 50 punts for 851 yards. In 1950 he set a record that still stands with 22.3 yard return average.

Returning kicks and returning punts are two different skills. And for this reason, the names are different at the top. Quan Cosby is the Longhorns all-time leader in kick return yards with 1,731 yards from 2005-2008. Second on the list is D.J. Monroe with 1,621 yards from 2009-2012.

Most combined punt and kick return yards in Texas history

Most kickoff returns for a touchdown

Here’s the first one:

WATCH: ‘We want to prove to this coaching staff that we’re not a bunch of 5-7 guys’