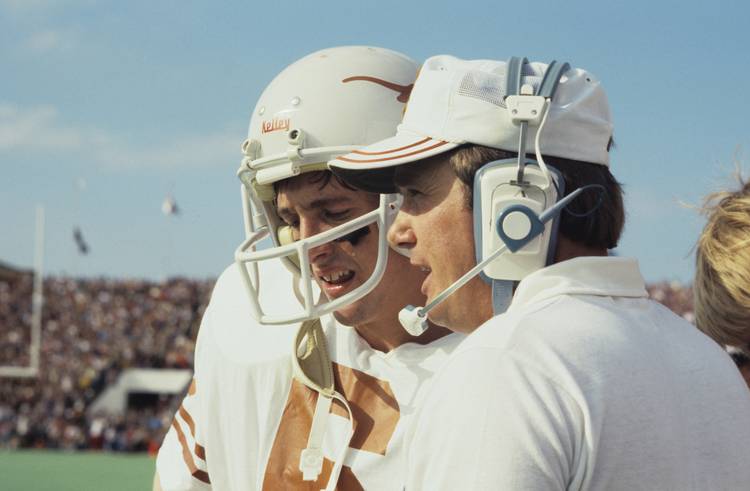 This is a common refrain by football fans who yearn for yesteryear, when the sport was a test of will and strength more than a showcase of “arm talent.” The games take too long and the players don’t hit hard enough, they say.

To hear legendary Longhorns running back Earl Campbell tell it, modern football is akin to professional wrestling, “and we all know now that we’re grown men that wrestling’s fake.”

And the penalties. Don’t get them started. Back in their day, someone had to spill blood before a flag hit the turf. Now it’s too much to lay a finger on a quarterback. By that logic, there must have been a lot of blood shed by Longhorn opponents in the 1970s.

You might find the years attached to the most penalized teams in Texas history surprising. (Or just use it as more fuel to say that these were some bad dudes who didn’t care about drawing flags, your call.)

Who said discipline leads to success? The Longhorns went 11-1 — running the table before a 10-9 Cotton Bowl loss to Georgia — while racking up massive amounts of penalty yards. Texas drew 96 fouls for a total of 849 yards. That doesn’t even account for the nine penalties called on the Longhorns in the bowl game.

The David McWilliams-led Horns were called for 98 penalties totaling 851 yards. They finished 5-6.

One of three Mack Brown squads that crack the top 10 in total penalty yards, with 852. Of course, the Longhorns played 13 games that season and won the national championship. This might be the first time their penalty yards have ever been brought up, as Texas was just that much better than everyone it played.

When it came to committing penalties, the Longhorns were on another level under Akers. In fact, 1983 was fairly calm compared to these top two. The 1978 squad was the first to surpass 1,000 penalty yards, racking up 1,008 in 11 games (not including the bowl game) while going 9-3. Which brings us to…

Here’s the ultra-fast recap of Texas football in 1980: Hot start, terrible finish and a lot of yellow. Akers’ squad committed 95 penalties that season, and they were major ones. Not including the Bluebonnet Bowl loss to North Carolina, the Longhorns accumulated 1,023 penalty yards in 11 games. That’s 93 yards per game. Oh, and they finished 7-5 after a 5-0 start.