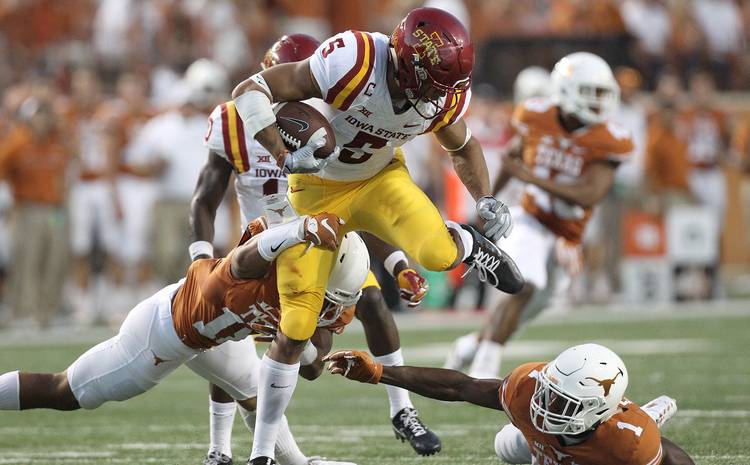 Spring football is in full swing and the spring game will be here soon. To celebrate, we’re counting down with 50 facts for 50 days.

It’s awfully hard to look past the Longhorns’ road trip to USC on Sept. 16, but let’s try for just a second. Texas will get a little breather before its Big 12 opener, which is set to take place Thursday, Sept. 28 against Iowa State in Ames, Iowa.

Jack Trice Stadium still holds some bitter memories for the current Texas players, many of whom experienced the 24-0 beatdown in 2015 firsthand. Let’s see what the numbers have to say about the Cyclones, who finished 3-9 overall in 2016.

Despite offensive woes (by Big 12 standards), the Cyclones were machine-like in the red zone. Iowa State ranked eighth across FBS in converting red zone opportunities, with 92.7 percent of red zone possessions resulting in points.

About that offense: Iowa State averaged 421.6 yards per game, which ranked 60th nationally out of 128 FBS teams. However, the Cyclones were eighth out of 10 in the offense-heavy Big 12. Which resulted in…

The Cyclones averaged 27.7 points per game, which ranked ninth in the Big 12. Kansas was the only team with a lower scoring average. Iowa State scored a season high in its 66-10  blowout of Texas Tech on Nov. 19, but the Longhorns held the Cyclones without a touchdown when they came to Austin.

Allen Lazard has been Iowa State’s top receiver the past two seasons, and after deciding to return for his senior season he’ll be eager to prove himself to NFL scouts in 2017. As a junior, Lazard caught 69 passes for 1,018 yards and landed first-team Big 12 honors. Against Texas, he made seven catches for 65 yards.

Of 44 players on the two-deep at the end of Iowa State’s season, 32 are eligible to return in 2017. Like Texas, the youthful Cyclones have had months to stew over missing a bowl which should fuel them through the offseason. Both teams should be starting to take shape by late September, and both will have their first major test out of the way (Iowa State hosts Iowa on Sept. 9).

WATCH: What ‘wild man’ will be Texas’ vocal leader on defense in 2017?