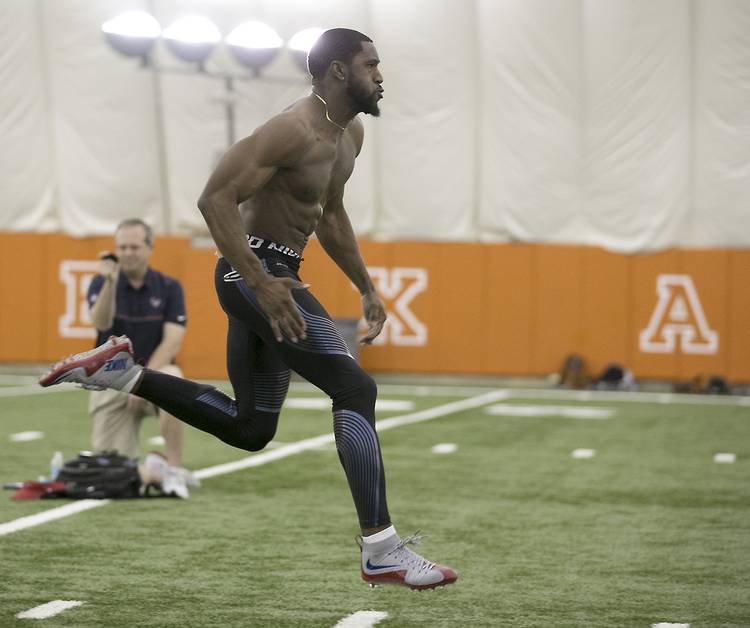 Sheroid Evans runs the 40-yard dash for timing purposes as he joins a host of Texas players who participated in the Texas Football 2017 Pro Day held Tuesday March 28, 2017 at the team practice bubble. RALPH BARRERA/AMERICAN-STATESMAN

Evans was one of 15 Longhorns who worked out at Texas’ pro day on Tuesday. An aspiring fashion designer, he will also be featured at UT’s upcoming fashion show at the Erwin Center on April 19.

Evans disclosed that he won’t be the football team’s only tie to the runway. Former teammates Jason Hall, Jerrod Heard and DeShon Elliott will serve as the models for his three-piece collection, evening wear and activewear.

S/O to the homie @sheroidevans for doing his thang again!! Y'all stay tuned to his fashion show April 19th at 7pm. pic.twitter.com/vnT67vuFF7

Evans has been juggling workouts, school and his clothes this semester, but football was on the forefront on Tuesday. A sixth-year senior, he recorded eight tackles and four pass deflections over nine games in 2016. After losing his 2014 and 2015 seasons to knee injuries, Evans said it “was really cool” that he worked out in front of NFL teams.

“This has been a long time coming,” said Evans, who is likely a longshot to reach the NFL. “I didn’t even know if I was going to make it this far.”

Given his interest in the fashion industry, Evans was asked to grade the clothing the Longhorns were given for their pro day.

“I love the gear,” Evans said. “It’s more stuff to add to my collection of over eight years or however long I’ve been here.”