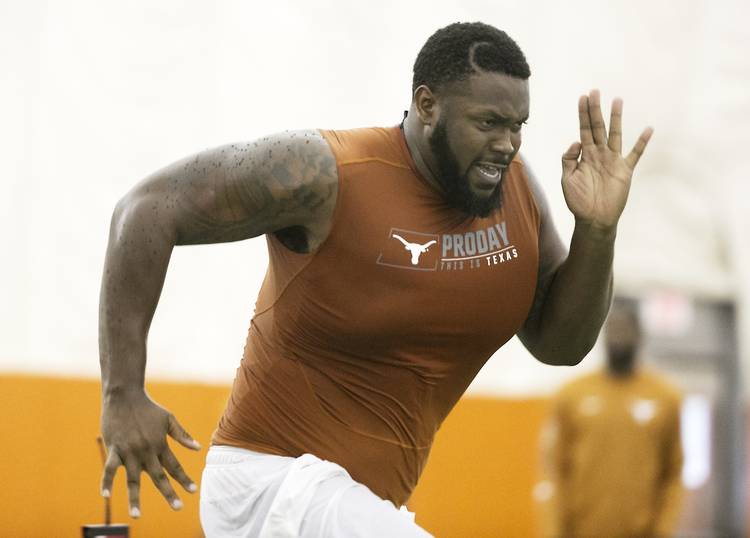 On Tuesday, Kent Perkins had a performance on the bench press that would have stood out at the NFL scouting combine.

He wasn’t happy about it.

Following his workout at Texas’ pro day, the Texas offensive lineman said he recorded 35 225-pound reps in the bench press. At last month’s combine in Indianapolis — to which Perkins did not receive an invitation— Utah’s Isaac Asiata had 35 reps, which led all 40 offensive linemen who were there. Perkins, though, said he was aiming for 42 reps since he’d done 40 before.

“When I hit the rack in bench press, it made me mad,” said Perkins, who figured that his adrenaline may have gotten the best of him. “I had more in me.”

Perkins made 34 starts in college, mostly as a tackle, but the Dallas native started at right guard in 10 of Texas’ 12 games this past season. (He was injured against UTEP and suspended for the Oklahoma State game). He’s looking to become Texas’ first offensive lineman drafted since Tony Hills in 2008.

Perkins, who’s 6-4, estimated that he spends five or six hours each day training. Checking in at 320 pounds on Tuesday, he said he felt a little winded by the time he went through his position drills. It was still a “pretty good day” by his standards as he starred on the bench press and hit 107 inches on his broad jump and 30.5 inches on his vertical leap.

“I just want to get better at my technique,” Perkins said. “Numbers (are) totally different than actual football.”